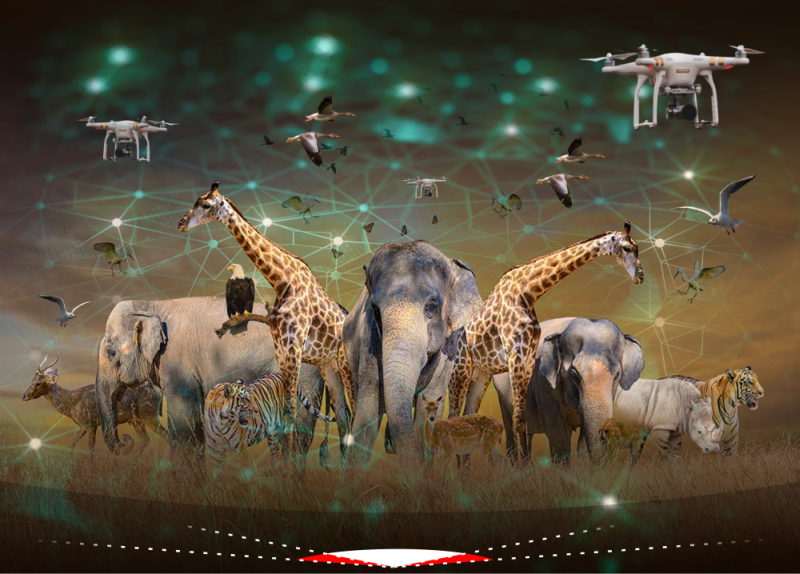 The relationship between man and nature has become increasingly unequal and abusive. Man has caused immense environmental destruction such as habitat degradation, overexploitation of natural resources, human-wildlife conflict, illegal trafficking and much more. Our planet is losing its biodiversity at an unprecedented rate. A recent report by the World Wildlife Fund (2020) suggests that since 1970, more than 20,000 populations of mammals, birds, amphibians, reptiles and fish have declined by an average of 68%. Many of these creatures are essential to the functioning of entire ecosystems. Given the rate of decline of the wildlife population, its conservation is of paramount importance. Fortunately, the use of technology in this area offers a glimmer of hope. Artificial intelligence (AI) is one such advanced technology. AI is a branch of computing and technology that develops intelligent machines and computer programs to perform tasks that otherwise require human intellect. We could productively think of AI as a human-made brain. Now, how does AI contribute to wildlife conservation?

Technologies such as AI-enabled drones, also known as unmanned aerial vehicles (UAVs), are changing the dynamics of wildlife conservation. A UAV is a simple aircraft that has no human operator, crew, or passenger on board. It provides an adaptable, accurate, and cost-effective answer to technical problems related to law enforcement and conservation management. The drones are equipped with a photography system and AI (Machine Learning) software that allows the operator to plan a pre-programmed flight. Drones collect remote sensing data at fine temporal and spatial scales. With the help of drones, researchers can acquire a large volume of image-based data from a wide variety of habitats, including those that are difficult to access on foot. Compared to manned aircraft, most UAVs are smaller and quieter, making them a less intrusive option for conducting wildlife surveys.

AI-powered drones have been used for the first time in Kaziranga National Park to monitor rhino poachers. Currently, there are three drones in the park, two with the Kaziranga Police Department and one with the forest officers. Coordinated by Tata Consultancy Services (TCS), these drones now patrol the 430 km2 national park. The drones are equipped with infrared imaging cameras to track poachers operating at night, allowing better vigilance of nocturnal activities. The drones can stay in the air for 40 minutes and the images they capture can be monitored in real time. In this way, AI-equipped drones help reduce the difficulties encountered in wildlife monitoring.

AI also plays an important role in the conservation of endangered species. Many AI-based applications are used to achieve the Sustainable Development Goals (SDGs), namely SDGs 14 and 15 (SDGs 14 and 15 aim to conserve, restore and promote the sustainable use of “life under water” and “life on land”, respectively). Scientists assess data related to whale numbers and welfare using marine robots, remote sensing and machine learning models on Microsoft Azure. Conservationists are using AI with predictive statistical modeling to monitor Antarctic penguins in real time. WWF and Intel are working with academics to use artificial intelligence to save Siberian tigers in China. AI can thus be usefully used by researchers to identify an animal’s location, time and date of sighting, migration patterns, relative abundance, and even its social background. Gadgets, software, and AI-enabled monitoring systems are being used to track and understand repetitive animal behaviors, such as breeding patterns, feeding routes, and hunting routines.

AI also helps conservation efforts by preventing collisions between wildlife and vehicles. To minimize collisions, large mammals and pedestrians are detected using thermal cameras coupled with radar, a visual sensor and a convolutional neural network (CNN). Given a set of real-world photographs or videos, this AI model learns to automatically generate input properties to achieve a given goal, such as identifying an image, object, or face. One such technology is StradVision (a pioneer in AI-based vision processing technology for autonomous vehicles) which is modeled on deep learning-based SVNet software.

AI can also help predict forest fires. There are several AI programs that analyze high-resolution satellite images to predict the intensity of wildlife burning, then coordinate with the data to help with fire forecasting.

Additionally, AI can be effectively deployed as an early warning system against poaching. : WildEyes is one such system that uses simulated data models to track mammals such as elephants and rhinos. AI algorithms are also designed to spot wildlife species or features, such as horns or scales, that exist in an image or video, while identifying the environment in which they appear, such as habitat. natural or a market.

Although AI has the ability to be a useful tool for wildlife conservation, there are some challenges that need to be considered. Drones are limited by the very qualities that make them desirable. They have limited durability and any technical error can lead to a complicated and costly crash. Due to the complications of using thermal imaging technology, they can be difficult to use. In India, where staff members struggle to access minimum requirements such as proper footwear and clothing, drone use still has a long way to go. These technologies can also lead to poor relations between locals and conservation authorities if they are not properly introduced to the technology. In particular, when used in remote areas of developing countries where people have had little exposure to electronic devices, these technologies can raise doubts, conspiracy theories and suspicions. Accordingly, the introduction of “responsible AI”, which outlines general procedures for ethical approval and provides relevant guidance on an algorithm and its limitations, is something that can be advocated. And for this, conservationists, AI researchers and local communities must work hand in hand.

Clearly, AI technologies are having a significant impact in the field of wildlife conservation. Due to the development of several services for AI, conservation efforts are now significantly more informed and efficient. AI sheds light on various ways to protect life forms by providing massive data on what is happening to wildlife. With its advancements, many interesting possibilities are now available. However, this will only be beneficial if the AI ​​models are trained efficiently using the appropriate machine learning datasets. As humans learn to balance their progress with the demands of wildlife, AI tools have arrived at a favorable time to enable sustainable coexistence between humans and animals. It is therefore crucial to continue research on AI as a revolutionary solution to environmental challenges.

The writer works as a lecturer at the University of Plaksha