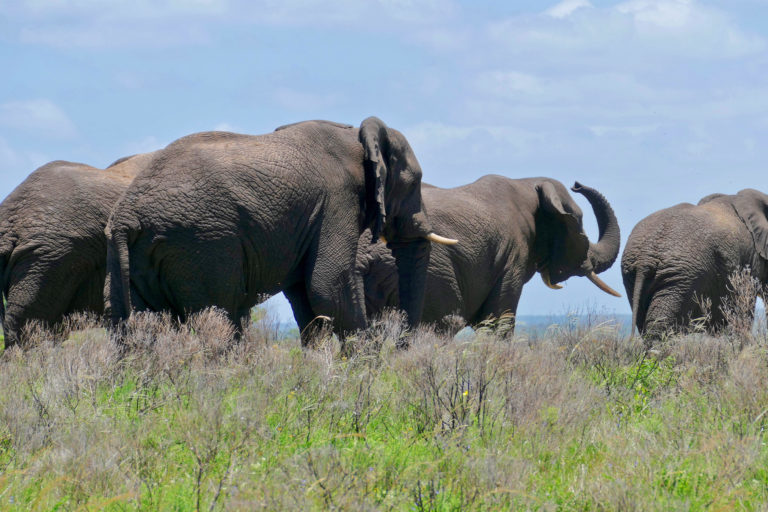 How do you fundraise for wildlife conservation in the most modern way of the 21st century? Non-fungible tokens, or NFTs.

In the forests of northeastern South Africa, Wild Funds Tomorrow, a US-based non-profit organization, has done just that. Since 2017, the organization has been trying to raise funds to buy land, remove fences and clear vegetation to connect two protected areas – MunYaWana Reserve and iSimangaliso Wetland Park – to allow species such as elephants, rhinos and lions to roam freely between landscapes, something that has not been possible for years. Of the $1.5 million raised so far, $30,000 was raised by WildCards, a South African platform that combines wildlife conservation and blockchain technology.

In WildCards, animals are depicted as unique digital artworks, similar to NFT’s “Bored Ape” series, some of which sold for nearly $3 million during Ether’s peak last year. And like Bored Ape NFTs, WildCards can be bought and sold using Ether, the native cryptocurrency of the Ethereum blockchain platform. The owner of each card acts as the guardian of the animal by donating a predetermined amount each month to the conservation organization protecting the animal or species depicted on the card. Since its launch in 2019, the WildCards platform has engaged with blockchain, cryptocurrency and NFT enthusiasts to raise approximately $77,000 (through July 26, 2022), with the funds distributed to organizations grassroots conservation all over the world, including countries like Kenya, India and Malaysia.

“WildCards imbue people’s commitments to wildlife conservation in a fun and playful way,” WildCards co-founder Jason Smythe, a software developer, told Mongabay in a video interview. “It does this through technology that cuts out middlemen who charge fees.”

Although NFTs and blockchain, the technology behind them, remain obscure to many, their applications are being explored in different areas: from secure money transfers to land data storage, among others. In the field of wildlife conservation in particular, the immutable and transparent nature of the technology means that it could be used not just to raise funds, but potentially to enforce contracts as well as to trace and track the trade of wild species. However, excessive power consumption and inaccessibility of blockchain technology could be some of the significant drawbacks of its large-scale application. The nascent nature of the technology also leaves many people unaware and wary of its uses.

Smythe acknowledges the downsides, but says the nascent nature of the technology means a lot is likely to change in the years to come. “Technology isn’t set in stone yet. It’s like listening to someone talk about the future of the internet in the 90s,” he says. “The experimentation that’s going to happen over the next few decades is going to be interesting.”

Peter Howson, a senior lecturer in international development at Northumbria University in the UK, said he was initially enthusiastic about using blockchain technology for conservation purposes. But over time, he became more skeptical.

For one thing, the technology’s carbon footprint outweighs the benefits it could bring to wildlife conservation. According to the Cambridge Bitcoin Electricity Consumption Index, mining bitcoin, the world’s largest cryptocurrency and currently the most popular application of blockchain technology, consumes 92 terawatt hours of electricity each year – well more than energy consumption in countries like Venezuela, Belgium or Finland. “By using this technology, you are legitimizing an incredibly environmentally destructive industry, which is the crypto industry,” Howson told Mongabay in a video interview. “It is certainly not an appropriate way to fund a just transition to a green economy.”

The control of technology by a few Northern technocrats and entrepreneurs has also raised questions, particularly in the context of its use to dictate how resources are managed, distributed and used in the South. Outside of fundraising for projects, Howson says, he has yet to see compelling examples of how blockchain technology could help wildlife conservation. “Most cryptocurrencies have a hammer and look for nails they can break,” he says. “The starting point should be the people doing the community and conservation work. Don’t start with the technology solution.

Daniel Oberhauser shares the same point of view: that the starting point should be an analysis of the reality on the ground and possibly adapting the technology accordingly, if it seems suitable. During his research at the University of Oxford in 2019, Oberhauser proposed a prototype that uses smart contracts, another application of blockchain technology, to facilitate a more efficient and transparent system for making payments for people. ecosystem services (PES).

Smart contracts are programs that perform automated transactions based on certain predetermined conditions. For example, if the contract is to make a payment at the end of a task, it will make the payment automatically as soon as it verifies that the task is complete. Oberhauser’s prototype uses this mechanism to ensure that a certain person or community is paid for the services they provide for environmental and wildlife conservation.

Payments for ecosystem services, or PES, are often used as an incentive to involve local communities in conservation efforts, but inefficient financial systems and corrupt on-the-ground management mean payments often don’t reach beneficiaries on time. or in full – or at all, sometimes. Oberhauser’s Blockchain for Ecosystem Payments prototype aimed to eliminate the intermediaries through which these leaks can occur and to use smart contracts to ensure transparent payments. The idea was to use Google Earth Engine to monitor whether a particular forest was maintained or whether a species remained protected. If these conditions were met, the smart contract would automatically execute the payment transaction. The inherent characteristics of the smart contract make it transparent and difficult to modify.

However, challenges arose when the realities on the ground emerged. Who will decide how the benefits will be shared? How will recipients in the Global South receive payments through technology that, for the most part, is not accessible to them? A 2019 article published by Oberhauser in the journal Frontiers in the Blockchain found that the inaccessibility of the technology would necessitate “a heavy reliance on trusted intermediaries” – essentially bringing in a new cohort of intermediaries and negating the decentralized nature of blockchain technology. As a result, the prototype was never implemented in the field.

Since the publication of his article, says Oberhauser, little has changed. It emphasizes the need to integrate technology into governance and policies at the field level. “People who understand the technology are usually Western engineers or entrepreneurs who usually have no idea about the governance and management of natural resources on the ground,” Oberhauser told Mongabay in a video interview. “There is still a gap between people who know these two aspects.”

Like WildCards’ Smythe, Oberhauser says the technology needs to be better developed and tested before it can be applied to wildlife conservation. But that, too, requires walking a fine line. As government and public confidence in conservation efforts erode globally, any misstep risks undoing years of work.

“It’s about managing expectations,” Howson says, adding that when results aren’t apparent, people see conservation efforts as a process they’re being lied to. “Eventually, you will run out of people who trust you.”

The Return of the Cheetah to Kuno Wildlife Sanctuary