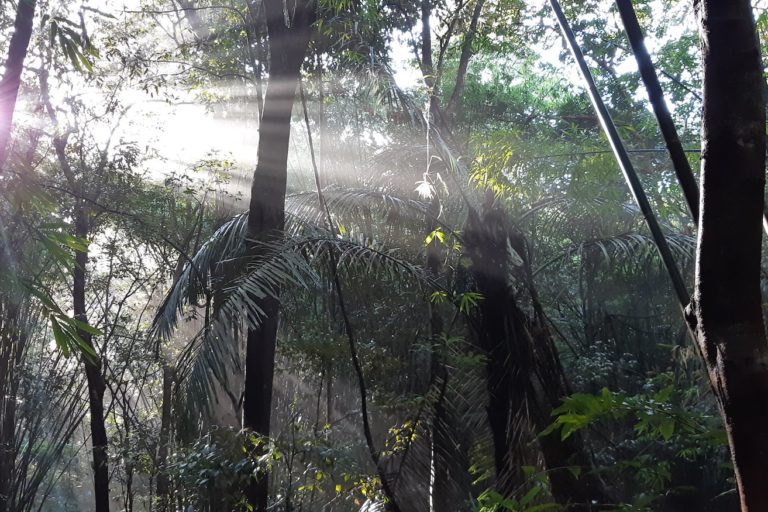 Keo Seima Wildlife Sanctuary stretches across a vast expanse in eastern Cambodia. But much of what was once covered in lush rainforest has been rendered barren by deforestation. Now, satellite data shows several recent forays into the sanctuary’s last stretches of primary forest, which provide vital habitat for wildlife, including several endangered species.

Covering some 300,000 hectares (3,000 square kilometers / 1,160 square miles), Keo Seima contains a dizzying array of animals and plants. The protected area is home to more bird species than any other in Cambodia, with 350 documented to date. About a quarter of the country’s last endangered Asian elephants (Elephas maximus) are found here, as are the world’s largest known population of critically endangered black-tailed douc langurs (Pygathrix nigripes). In total, researchers have documented 75 endangered species at Keo Seima, and at least 15 species new to science have been discovered over the past 20 years.

To help safeguard this biodiversity, the Cambodian government promulgated the protection of the area in 2002. The initial incarnation of Keo Seima was the Seima Biodiversity Conservation Area, after which it became the Seima Protection Forest in 2009 before being designated again as a wildlife sanctuary in 2016. However, it appears that official protection has not been able to prevent the onslaught of deforestation that has stripped Keo Seima of much of it. its forest cover.

According to satellite data from the University of Maryland (UMD) visualized on the forest monitoring platform Global Forest Watch, Keo Seima lost 32% of its primary forest between 2002 and 2020, with most of this loss occurring produced after 2011. While the largest peak occurred in 2013/14 before declining in 2015, UMD data indicates that the rate of deforestation of the sanctuary is on the rise again, loss of primary forest in 2019 having doubled compared to 2018 – and 2020 even more.

Preliminary data from UMD’s Global Land Analysis and Discovery (GLAD) laboratory suggests that the forests of Keo Seima could experience another difficult year in 2021, with an “unusually high” number of deforestation alerts – more than triple the number of deforestation alerts. the average of past years – detected in February, March and April. Satellite imagery shows clearings extending into areas that had not been previously disturbed.

A Mongabay report in 2020 found that much of the deforestation in Keo Seima was due to illegal logging, with many felled trees destined for timber markets in Vietnam. Sources claim that forests are also cleared to make room for cultivated fields and plantations.

â€œThere is still a constant flow of timber from the Seima protected area across the border with Vietnam,â€ Cambodian forestry expert Marcus Hardtke told Mongabay in August 2020. â€œIt’s more diverse now, often at night, but it continues. And that almost always involves people in uniform on several levels. It is a balanced system of bribes and influence. If this balance is upset, violence can occur.

Keo Seima is also home to many indigenous communities, the majority of which are from the Bunong ethnic group. The government has introduced legislation designed to grant land titles to those who live within the boundaries of the wildlife preserve, but local sources say this is often used by land grabbers to establish legally legitimate claims over land. protected lands.

“The apparent goals of these legislative acts are lofty, and something on paper we support – to secure legal recognition of traditionally owned land, especially for indigenous people.” [Bunong] people, â€said a staff member from a conservation organization working in the region who spoke to Mongabay in 2020 on condition of anonymity. â€œBut the reality of its implementation is that the land has been, and probably will be, given to anyone who can paint a veneer of legitimacy to a claim for historic use. We strongly support legal titles for indigenous communities, and this has been and continues to be an important part of our work at Keo Seima.

Editor’s Note: This story was fueled by Places to Watch, a Global Forest Watch (GFW) initiative designed to quickly identify forest loss around the world and catalyze further investigation of these areas. Places to Watch relies on a combination of near real-time satellite data, automated algorithms and field intelligence to identify new areas on a monthly basis. In partnership with Mongabay, GFW supports data-driven journalism by providing data and maps generated by Places to Watch. Mongabay maintains full editorial independence over stories reported using this data.

Feedback: Use this form to send a message to the editor of this article. If you want to post a public comment, you can do so at the bottom of the page.