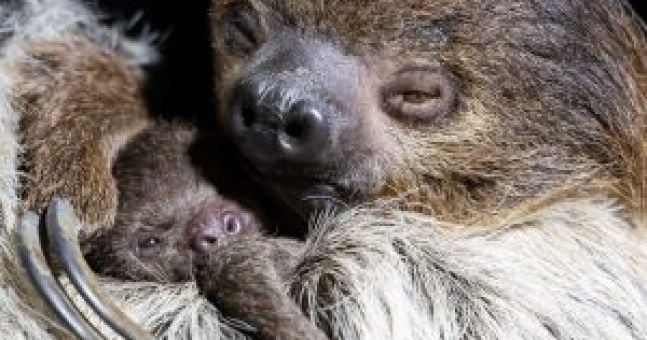 FOTA WILDLIFE Park in Cork today announced the birth of the first ever sloth to be born in the park.

Linnaeus’ baby two-toed sloth (Choloepus didactylus), whose gender is still unknown, was born on April 30 to mother Talyta and father Matheo after a six-month gestation. The public can now view the baby sloth in the Tropical House, which recently reopened to the public after being closed due to the pandemic.

“Fota Animal Park is delighted to announce the birth of a baby sloth. the slowest animal in the world, the sloth.

“Due to the nocturnal nature of the sloth, it can be difficult to spot the baby. Young sloths will cling to their mother’s belly for about five weeks until they have the strength to move through them. The little one is already pulling on leaves and other foods that we give to adults, without leaving the safety of the mother alone.”

Sloths are native to South America and eat, sleep, mate and give birth from their upside-down position among branches. Sloths are the only mammals whose hair grows in the opposite direction to the hair of other mammals. To accommodate their upside-down lifestyle, the hair parted in the middle of the belly and grew upwards towards the back. The hair on the face is directed upwards, allowing water to drain during thunderstorms.

Fota Wildlife Park is calling on the public to help name the baby sloth through this link for a chance to win an annual conservation pass.

This natural complex of Negros is now a wildlife reserve