How to explore the Periyar Wildlife Sanctuary during your visit

Stretching over vast expanses of the Cardamom and Pandalam Hills in the Ghats of southwest Kerala, with a total area of ​​925 km², Periyar Wildlife Sanctuary was declared a Tiger Reserve in 1978. Located in the region Scenic area of ​​Thekkady, Idukki district, the topography ranges from hills and plateaus to meadows and bodies of water. The emerald green hills are covered with tropical evergreen and humid deciduous forests. Thus, the reserve is able to maintain an incredible variety of flora and fauna.

This Garden of Eden is where I decided to spend part of my 35th birthday. It was the first time I spent my special day away from my friends and family, I wanted to mark it by doing something out of the ordinary. So I booked a chalet at the Spice Village resort and took a taxi to drive me from Kochi to the small town of Kumily, which is about 4 km from Thekkady.

The reserve offers a number of activities such as nature walks, border hikes, tiger trails, bamboo rafting, and oxcart rides as part of its ecotourism program. These are limited to 10 km² of the tourist area, which is part of the buffer zone. Thekkady is also famous for its spice and coffee plantations, scenic mountain trails, and mountain towns.

TO SEE AND DO

Nature walk
A paved road leads to the Periyar Tiger Reserve (https://www.periyartigerreserve.org/) from Kumily. The morning mist clung to the tops of the low hills, as I made my way through a world dominated by dazzling shades of green. An armed ranger and trained guides accompanied our group of six. Guides are usually from the local tribe and therefore their knowledge of the jungle is unmatched, passed down from generation to generation. Some are rehabilitated poachers, now guardians of this rich environment. Before entering the forest, we were given a pair of leech socks, a small lunch box and a bottle of water.

At first our group passed through houses belonging to the local tribal community, which were moved from the deepest corners of the forest to the outskirts. They have lived here for generations and travel long distances in the jungle confidently and unarmed to defend themselves. Slowly the road gave way to a red mud trail and it became quieter as we deepened into the sanctuary, the silence only broken by the occasional call of a bird.

The dense green foliage on either side of the path made it almost impossible to spot bird life or tree creatures in the canopy or in the undergrowth. Usually only the trained eyes of a naturalist or forest guide can spot sneaky movements in the undergrowth or branches, gently signaling visitors to look in the right direction, sometimes whispering to let them know what type of forest. ‘animal they admire.

The only sound we heard in the forest besides the cries of birds or the warning cry of a mammal was the sound of our feet walking over fallen branches and dry leaves. Every now and then we had to cross a narrow stream or stoop to make our way under a tangle of low climbing plants. You will only feel the sun’s rays on your skin if you are in a clearing, the rest of the time you will be walking under a dense canopy. Keep an eye out for the giant wood spider spreading its web between the trees, often sitting in the center patiently awaiting its next meal.

We passed pugs in the wet mud side by side with a porcupine paw print. One of the guides casually said that there was a strong possibility that a tiger could be watching us from somewhere in the dense foliage. Don’t stray or stray too far from your group, because you never know what you might encounter around the next tree.

Our guides stopped abruptly at one point, motioned for us to be completely silent, then pointed to a clearing where a large Indian bison was standing munching on grass. When you see photos of these magnificent red and black cattle your mind cannot comprehend how huge they are, but 200 yards away you begin to realize the incredible strength that a tiger must have to take down the one of them.

Suddenly she lifted her eyes and looked in our direction. We collectively held our breath, waiting and hoping that she wouldn’t charge us. Luckily the bison tend to be nearsighted so she started grazing again and we continued on, aware that the rest of the herd was probably obscured by surrounding vegetation. 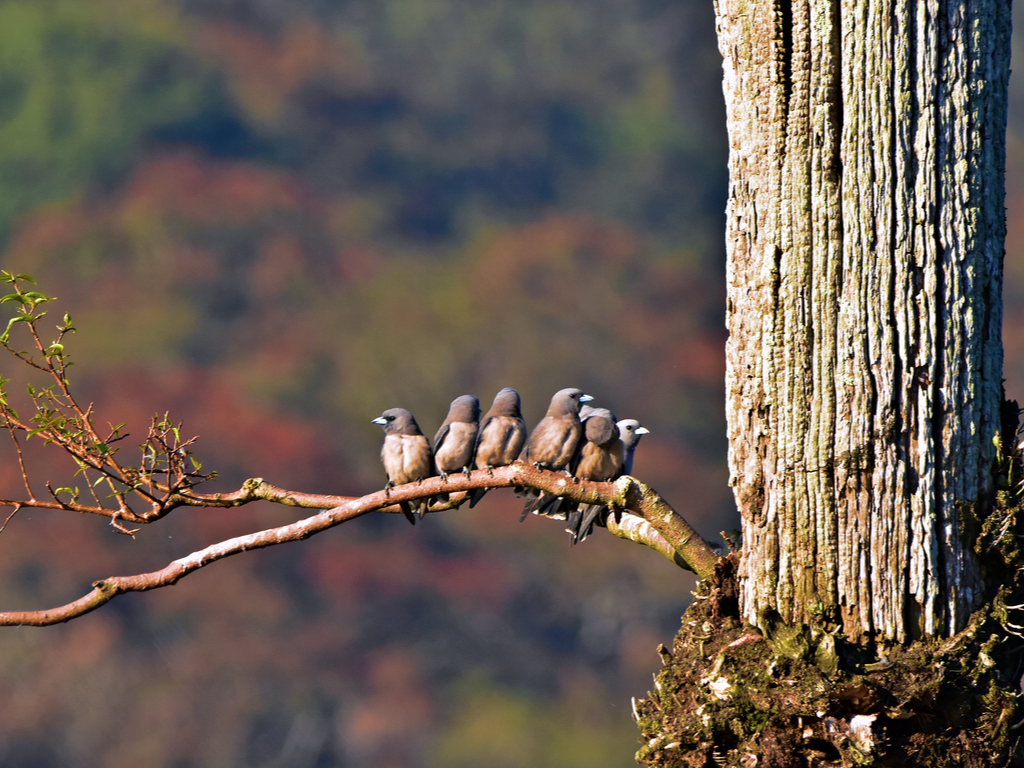 A little later we heard the distinct whistle that can only be produced by a large pair of wings. The great Indian hornbill was somewhere to our left, probably a mile away. Our eagle-eyed guides didn’t take the time to scan the forest with binoculars and focused on a tree he had conveniently perched on. We took turns admiring its distinct plumage, in awe of the yellow and black helmet that rests partly on its head and beak. Unfortunately, these large members of the hornbill family are threatened by habitat loss and hunting.

Birds aren’t the only creatures living in the trees here. The beautiful giant Malabar squirrel lives high in the canopy. You can spot one if you’re lucky. Its thick dark fur helps it blend in, making it almost indistinguishable from the branches, on which it often rests. The Nilgiri langurs also live in these regions. Unlike the more common gray langurs, these old world monkeys have a smaller body, covered with long, shiny black fur. Although herds of elephants live in the reserve, we did not encounter any except two that we saw on top of a hill, silhouetted against the sky.

Tip: Dress in dark or khaki colors, as animals are attracted to bright, moving objects.

Bamboo rafting
We got to the hot and sweaty Periyar Lake but the breeze cooled us down. The lake was formed by the construction of the Mullaperiyar Dam in 1895. Partially submerged trees still protrude from the water, making them convenient perches for a number of resident and migrating birds. Rafts are made from bamboo poles tied together with a thin rope. They may seem unstable when you step on them, but once you settle into your seat, you’re ready for a fairly comfortable ride. It was calm on the calm waters of this large reservoir.

If you are lucky you will spot elephants drinking and swimming along its shores. The drier the season, the more likely the animals will come out of the depths of the forest for a refreshing drink. Various species of cormorants, herons and egrets can be seen on the lake, as well as kingfishers, storks and eagles. Herds of parakeets often fly howling from tree to tree, in search of the best fruit or juiciest leaves. You may see a kingfisher or a cormorant dive underwater to claim its catch. They put on quite a show.

Tip: Keep a raincoat handy in case there are unexpected downpours. Wear a hat when you go out on the lake.

As we walked back on our way, I thanked my lucky stars for sending me this incomparable experience. In a world where forests are shrinking at an alarming rate, there is still one that is fiercely protected by the authorities and the tribes who live there. It is an ancient place that makes you fear and respect nature in all its primitive splendor.

Visit of the spice plantation 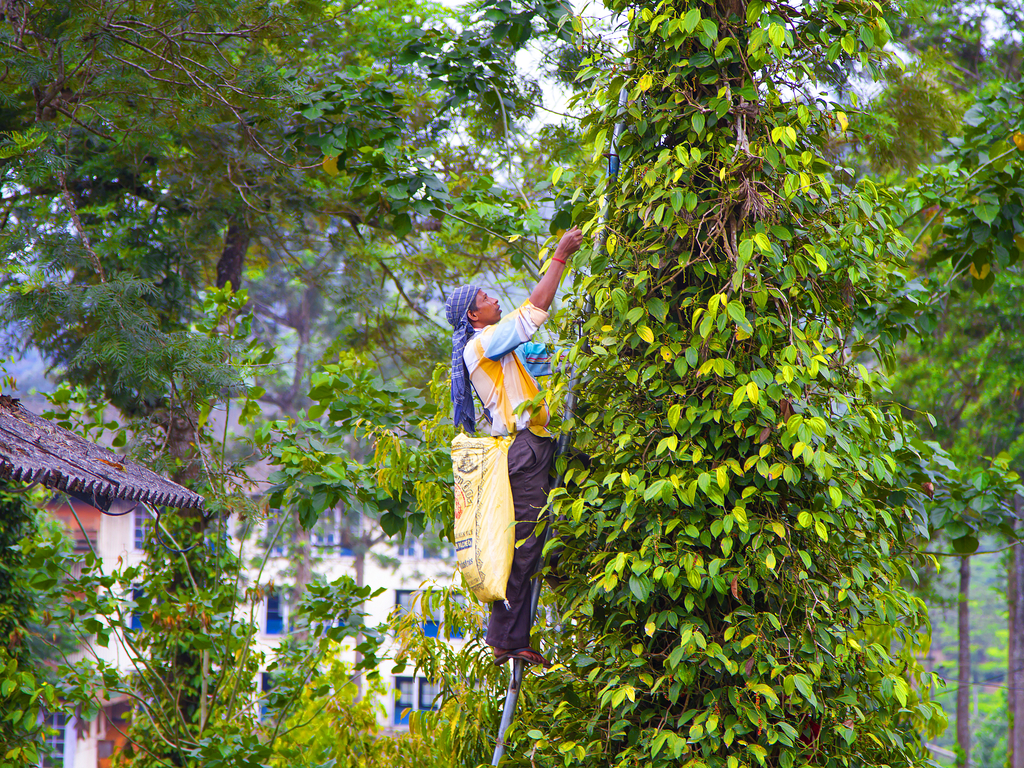 The next day I decided to visit one of the many spice plantations that Thekkady is famous for. Several guided tours give visitors a glimpse of this aromatic enterprise. I had always imagined that a spice plantation was acres of open fields. Instead, what I saw was a lush mini jungle, aptly named Abraham’s Spice Garden (hours: 8 am-6.30pm). Abraham the owner took us for a walk around his property and showed us striking flowers such as the dazzling red bird of paradise. He offered us to taste cinnamon leaves, which were sweet, as well as slightly tangy carambola seeds.

Cardamom grew close to the ground in several patches, coffee plants with their red coffee beans were still present, and pepper vines meandered along the tree trunks. Brown cocoa pods grew in a tree, while a lemon the size of my hand hung from another. Various types of banana trees, including one with leaves that can reach a span of 15 feet, dot the property. Throughout the walk, Abraham entertained us with his own brand of humor. There is a spice shop on the property where you can buy cocoa powder, cinnamon sticks, peppercorns, coffee, turmeric, cardamom, and other spices.

Where to stay and eat 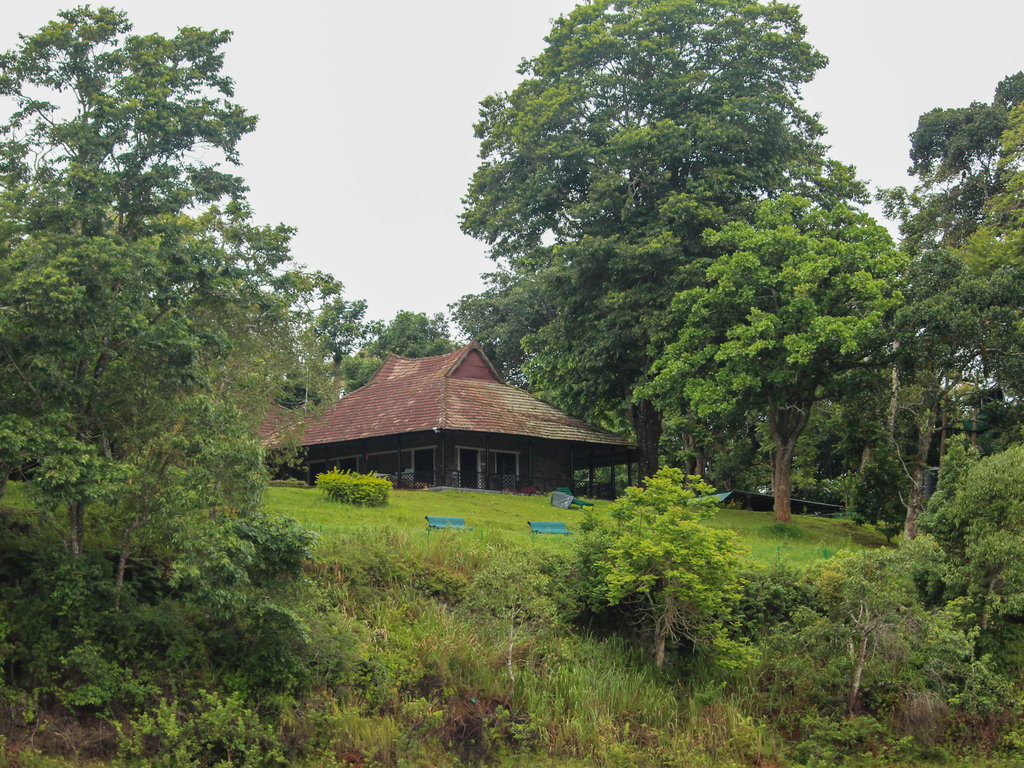 There is a wide range of options to stay here, from luxury to basic. Thekkady also has a few hotel complexes located inside the sanctuary. There aren’t many independent restaurants, but all hotels offer dining and non-guests can eat to the max without notice.

Inside KTDC’s Aranya Nivas Forest is a great option for bird watchers, just inside the forest. KTDC’s Lake Palace is also located in the sanctuary. There are six rooms here, with restaurants and internet. The Lake Palace can only be approached by boat. KTDC’s Periyar House is located halfway between the main entrance and the boathouse. You’ll get a feel for the jungle if you stay here, and there’s a restaurant and beer bar, plus boat, hike, and plantation tours.

The Forestry Department also owns Bamboo Grove in Anavachal, with 15 cabins; Periyar Tiger Trail inside the forest, with three tents and the Tented Camp in Vallakkadavu. Meals are organized. For reservations, contact the Ecotourism Center, Periyar Tiger Reserve.

Outside the forest CGH Earth Group’s Spice Village, located in a spice garden near the forest, has a pleasant ambience. There is a bar, a wildlife center and an Ayurvedic treatment center. The hotel organizes tours of the tea and spice gardens and offers a variety of activities. Club Mahindra Tusker Trails, formerly Taj Garden Retreat, has 49 charming cottages with restaurants, swimming pool, spa and Ayurvedic center.