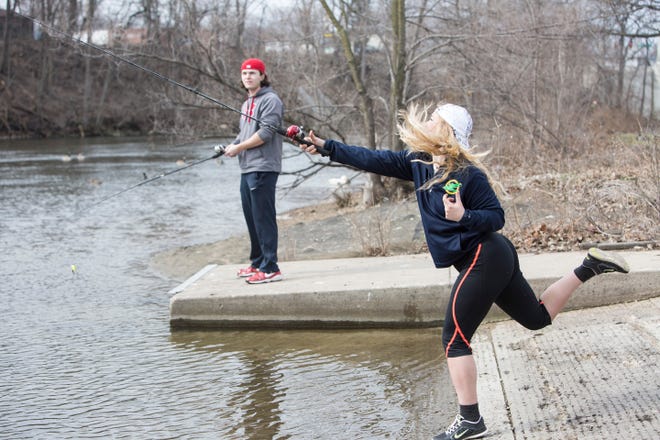 On April 1, a new year begins for Indiana hunting, trapping, and fishing licenses, as does the first spike in fees in 16 years in some cases, even longer in others. It may irritate you or inspire you, but the state has long lacked the money to track wildlife and their habitats.

“It’s been pretty disastrous,” said Emily Wood, executive director of the nonprofit advocacy group Indiana Wildlife Federation. And because Indiana’s Fish and Wildlife Division often lacks enough money to match federal grants, she adds, “We (the state) leave money on the table all the time. for wildlife conservation.

If it had the money, the division could research and obtain data on species such as gar, an ancient native fish, says Linnea Petercheff, licensing and permitting supervisor. It could manage squirrel and rabbit populations while the deadly rabbit hemorrhagic virus moves to other parts of the country.

And it could better handle species that roam Indiana, like black bears and, believe it or not, wild armadillos that have roamed Indiana’s southwestern counties.

Petercheff says the division is not about expanding its programs but rather maintaining and making up for what is missing. The division had to downsize. Additional income would also help to hire more conservation law enforcement officers.

Taxpayers’ money does not pay for these things. Hunting and fishing license fees do. And none of the license fees go to state parks, Petercheff says. But paddlers benefit from the public boat launches the division maintains. Birdwatchers take advantage of habitat in fish and wildlife areas, such as Jasper-Pulaski in Medaryville, where sandhill cranes congregate in the thousands.

Who will pay the most license fees?

The largest fee increases are for non-residents, for whom an annual fishing license goes from $35 to $60 and a one-day license from $9 to $15, as well as a seven-day trout stamp. $20-$35 days and a growing deer permit package. from $295 to $550. Several fee hikes for non-residents are only a few dollars.

For Indiana residents, several fees increase from $3 to $7, such as annual fishing licenses which increase from $17 to $23, although the deer license package increases from $65 to $91 while many individual deer permits go from $24 to $39.

The license year runs from April 1 to March 31, 2023. Youth 17 and under do not need a license to fish in Indiana. Click here to access the full set of new fees.

Indiana Wildlife Federation members, who are mostly hunters and anglers, largely support the increased fees, Wood says, because they understand the need.

Bonnie Kelley of Kelley’s Bait Shop in Lakeville, which sells fishing licenses, says anglers are unhappy with the increases as they wonder when they’ll see fishing improvements at nearby Potato Creek State Park. She suggested and would like to see an expanded parking area at the cramped public ramp at Pleasant Lake, which she sees from her store.

North Liberty’s Dave Kominkiewicz, a 49-year Ducks Unlimited member and local chapter member, says he’ll accept the increased fees when he buys his hunting license, as he does every year, because “everything goes up … but I don’t accept” I don’t want them to double it.

“I’m passionate about waterfowl hunting,” he says. He values ​​the work of state biologists in the field, who make sure the birds are there for him: “Is the population healthy enough to sustain a harvest?

Longtime former Tribune outside columnist Louie Stout said the increases were long overdue, but the state could have done a better job of making the case to the public before the Natural Resources Commission of the state didn’t quietly approve the new fees last fall.

Wood says the state specifically timed the fee increase so it could tap into a potential new flow of federal dollars that would “put Indiana in a significantly better position.”

February 2021:Six Creatures to Love and Why They Need Indiana’s ‘Remote’ Wetlands

Congress is considering the Recovering America’s Wildlife Recovery Act, which, if passed, could bring Indiana up to $14 million to help threatened and endangered species if the state provides approximately $5 million or more. State fee increases, Wood says, can help provide that match.

The law, which she said could be considered in early April by the US Senate’s Environment and Public Works Committee, would allocate $1.4 billion nationwide from a sanctions-fed fund. companies pay for violations of oil and gas leases.

Indiana raised $9.3 million in 2020 from the sale of fishing and hunting licenses alone. This amount is expected to increase by $4 million with the new fees over the coming year, but this will depend on the ability of anglers and hunters to continue to purchase licenses as they normally do. The fee funds 29% of the division’s budget and helps match federal grants, like the one that covers 47% of the budget.

Nationally, the number of anglers and hunters has declined in recent decades as other types of recreation compete for younger generations. In 2019, the Indianapolis Star reported that, from 2006 to 2016, hunting license sales in Indiana fell 22% while fishing license sales fell 13%.

The year 2020 has seen an increase in fishing and turkey hunting permits, Petercheff says, thanks to the pandemic pushing more people outdoors, but it’s unclear if that will continue.

She says the division is always looking for grants for additional funding and that universities sometimes donate their overhead for research projects.

Indiana also receives donations to its Nongame Wildlife Fund, either when filing your state taxes or through a website linked in this column online.

Wood says the Indiana Wildlife Federation and an alliance of other advocacy groups are looking for broader ways to generate dollars for conservation, adding, “We shouldn’t be putting all of this on hunters and anglers. at the line.”

They explored options such as adding taxes on hiking boots, bicycles and other outdoor equipment and exploiting real estate transfer fees and the Hoosier lottery.

Petercheff says fuel prices for equipment and vehicles, now at an elevated level, have long plagued the division’s programs, adding, “We’ve had a lot of cost increases over the years.

The week of April 11, the Indiana Department of Natural Resources will email a survey to anyone who has purchased a state fishing license and has an email address. It will include a wide range of questions to help develop fishing programs. Follow a link in this text here for a website with details.

News from the national park:Indiana Dunes National Park will begin charging admission to pay for upgrades

As we reported, Indiana Dunes National Park starts charging an entry fee on March 31. For a one- to seven-day pass, it’s $25 per car or $15 if you’re biking, walking, or boating, or $45 for an annual pass. Federal pass holders do not pay a separate fee. No charge if you are just passing through – only if you stop to hike, picnic or use the beach. No charge for military and veterans and those with permanent disabilities. Purchase passes at the Indiana Dunes Visitor Center or at www.recreation.gov/sitepass/indu. For details, visit www.nps.gov/indu.

Also in this column:Spring walks on the wild sides, in Plymouth, Lydick Bog and New Paris