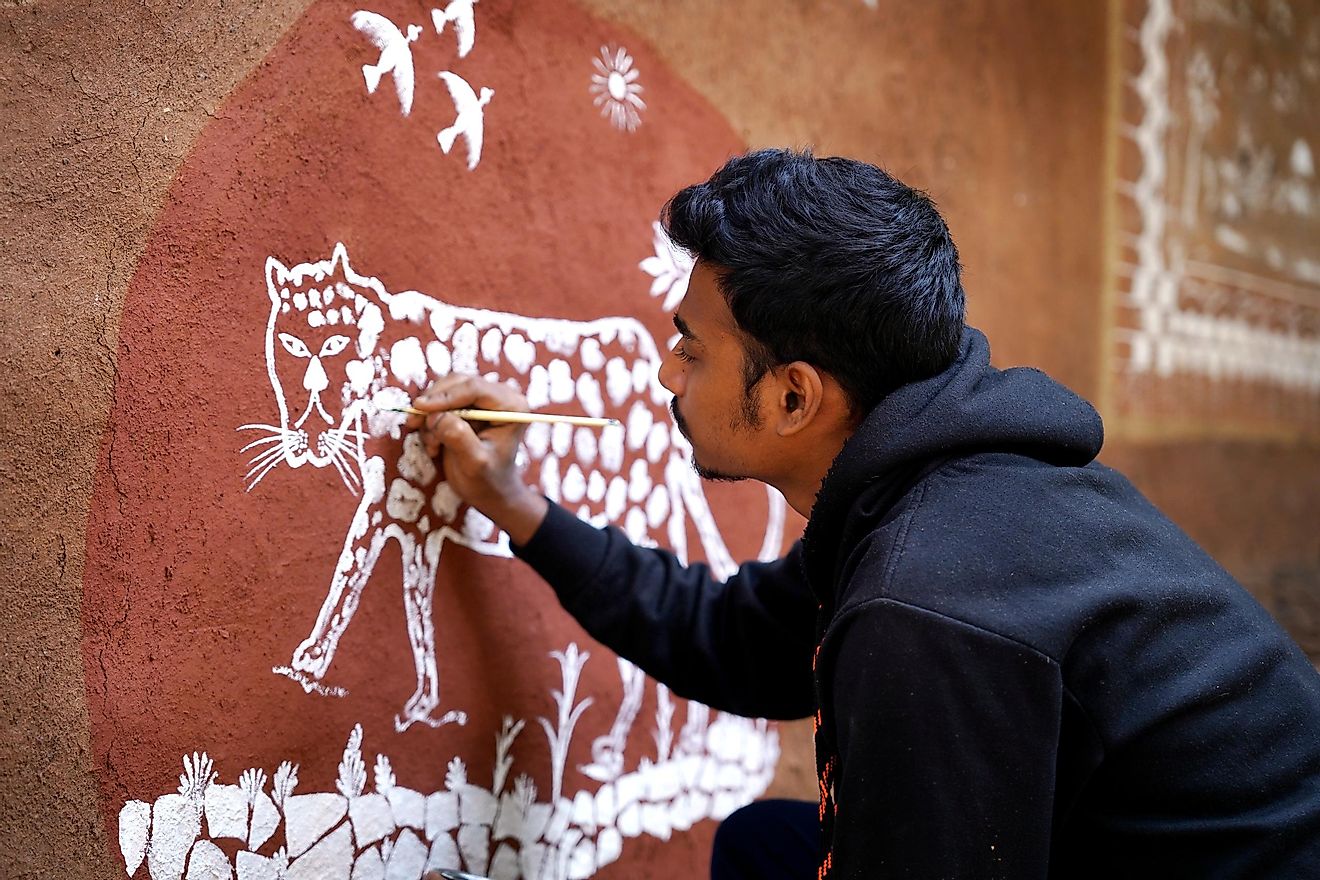 “In other towns people have cats and dogs, but here we have wild leopards as companions. Leopards are part of our family. We also pray to the Waghoba – our leopard deity, who protects us from all evil,” – Mumbai resident Prakash Bhoir.

Indeed, the bustling metropolis of Mumbai, the financial capital of India, is a city like no other. While it is home to a human population of over 20 million, it also has a heart spacious enough to accommodate over 40 wild leopards! Mumbai also has temples where the indigenous or Adivasis communities worship these big cats in the form of Waghoba. And according to science, this cultural reverence for predators by people allows them to share space with wild animals, aiding long-term conservation. Thus, understanding these cultural institutions is essential for the implementation of modern conservation practices.

The Gods and Dwellers of the Mumbai Forest

“We Adivasis of Mumbai worship Hirwa Devi or Green Goddess who blesses our lives with natural resources that sustain us. We also pray to the Waghoba or the Leopard/Tiger God. He is the king of the forest. The strength and courage of the Waghoba keep our forests safe. And we all know that forests are necessary for our survival“said Chaitali Bhoir, a young woman and member of the Adivasi community, as she showed us around her beautiful earthen house at Kelti pada, in the heart of the Aarey Milk Colony forest.

The Adivasis of Mumbai are indigenous communities belonging to various tribes like Warlis, Kolis, Dubbas and others. They have a deep connection with nature. In Mumbai, they live in tiny hamlets called padas, mostly in and around forested areas like Sanjay Gandhi National Park and the adjacent Aarey Milk Colony. Leopards roam wild in such places, but these people hardly complain. On the contrary, they are proud to live with predators.

“We respect wild animals and their way of life. We know that after dark we need to stay indoors and not venture out alone. It’s time for the leopards to go for a walk. Sometimes they attack our livestock. So whenever a leopard roars near us, we crack a coconut, praying to the Waghoba to spare our livestock but continue to protect our forest and our lives as it has done for millennia.said Prakash Bhoir, Chaitali’s father-in-law. Prakash, an Adivasi, is also employed in the local municipal corporation.

According to him, most leopard attacks on humans in Mumbai occur when people do not follow the rules of the forest. As immigrants from elsewhere encroach on the forest lands, they pay no heed to the ways of nature. They cut down trees, dump garbage irresponsibly, and alter the landscape in ways that derail the proper functioning of the ecosystem. With limited space and natural prey, leopards are now attracted to waste-eating dogs and pigs, bringing them into close contact with humans. And sometimes these predators end up attacking humans, leading to public demand to remove leopards from the area.

“Unlike our non-Adivasi neighbours, we welcome the leopard. We keep our environment clean and litter-free so that when the leopard visits us, it stays for a while and then leaves. A few months ago, a leopard visited my garden the day before my son’s wedding. He just stood there for a few minutes and then silently left. I told my wife that here is the Waghoba to bless us before the event!Bhoir said, pointing to where the leopard was standing a few yards from his house.

Bhoir also finds it unfortunate that news channels often feature stories of leopards entering human homes when, in reality, humans have invaded leopard territory. He fears that the fear of leopards spells misfortune for the forest. For him, leopards are beautiful animals and not the fierce and bloodthirsty beasts that people often think they are. Nature designed them to be carnivores, so they must hunt for survival. That can’t make them dangerous. If so, humans are also dangerous. For Bhoir and others in his community, however, leopards are part of the family.

“Our bond with this beautiful animal is such that if we don’t see or hear of leopard sightings in our area for about a week, we are concerned. We are concerned that someone has killed them or caused them other damage“, said Bhoir.

This deep connection to the forest and its leopards keeps Bhoir and the members of his tribal community alert. Whenever Mumbai’s forests are threatened, the Adivasis rise up in protest. During the Save Aarey movement, many of them were arrested by the police while protesting against the felling of trees in Aarey to build a carport in the underground. Their protests, however, were not in vain. The project had to be moved to a new location and part of Aarey was declared a forest reserve.

The worship of Waghoba and other elements of nature is not limited to the Adivasis of Mumbai but is more widespread. A study published in Frontiers in Conservation Science in 2021 documented more than 150 dedicated Waghoba shrines in Warli tribal villages in Mumbai and other parts of Maharashtra state. The study was conducted by researchers from WCS-India, WCT-India, INN Univ., Norway, and NINA, Norway.

The study found that the origin of the Waghoba institution is rooted in what modern conservation science today calls “human-wildlife conflict” and “the depredation of livestock by large felines”. Although the origin story has many variations, most depict Waghoba as someone born human. In time, the Waghoba showed “wagh or tiger/leopard” traits and killed the village cattle. The frightened villagers wanted to kill Waghoba but his mother brokered a deal with them. According to the agreement, the Waghoba would stay in the forest and not kill cattle. In return, people worshiped the Waghoba at Waghoba shrines and made occasional offerings to him in the form of animal sacrifices to appease him. Thus, according to the researchers, the Waghoba origin story itself instills a sense of kinship with the big cats in the hearts of Waghoba worshipers. And the institution of the Waghoba acts as a tolerance-building mechanism for people to share space with apex predators like tigers and leopards.

“India has practiced conservation through its culture for thousands of years. Cultural institutions such as the Waghoba cult have served as a driving force behind the deeply rooted conservation movement that prevails in the country.“, said Dr Anish Andheria, co-author of the study. He is also the president of the Wildlife Conservation Trust, India, and one of the main advocates of wildlife conservation in India.

“Ancient Indian scriptures describe animals as gods. Animals ranging from elephants and tigers to ants and rats are revered in the country. Such reverence for animals acts as a catalyst in safeguarding our ecosystems and the wildlife,” he said.

According to Dr. Andheria, it is more important than ever to recognize people’s cultural affiliations before they disappear in an age of consumerism and globalization, severing their connection to nature. The bond between man and nature must be rejuvenated and preserved before it is lost. He also believes that engaging local communities is key to pursuing conservation goals in India.

“Over the past five decades, conservation in India has mainly focused on protecting forest landscapes from humans. However, only about 5% of the land area of ​​the country could be protected in this way. It’s not sufficient. Protection must now be managed by the community. Conservation conversations should include local communities and their opinions incorporated when designing conservation programs,” he said.

Today, the socio-economic scene of India is changing at a rapid pace. Rapid urbanization is occurring throughout the country. The integration of indigenous communities like the Adivasis of Mumbai into mainstream society dilutes their nature-based cultures. But people like the Bhoirs are determined to hold on to their traditions and beliefs.

“People call Adivasis poor and illiterate. But our homes are surrounded by thousands of trees and rich biodiversity. How can we be poor when we have so much natural wealth? We are also proud of the knowledge inherited from our ancestors. We are aware that the forest keeps us alive. It gives us oxygen, food and more. And that’s why we love water, soil, forest and wildlife. We are proud of our beliefs because they help protect and preserve natural resources for our future generations“said Prakash Bhoir.

“We are like guests on this Earth. We must say thank you to Mother Earth for our life. So don’t hurt him. No other species does“, is Bhoir’s message to all of us.