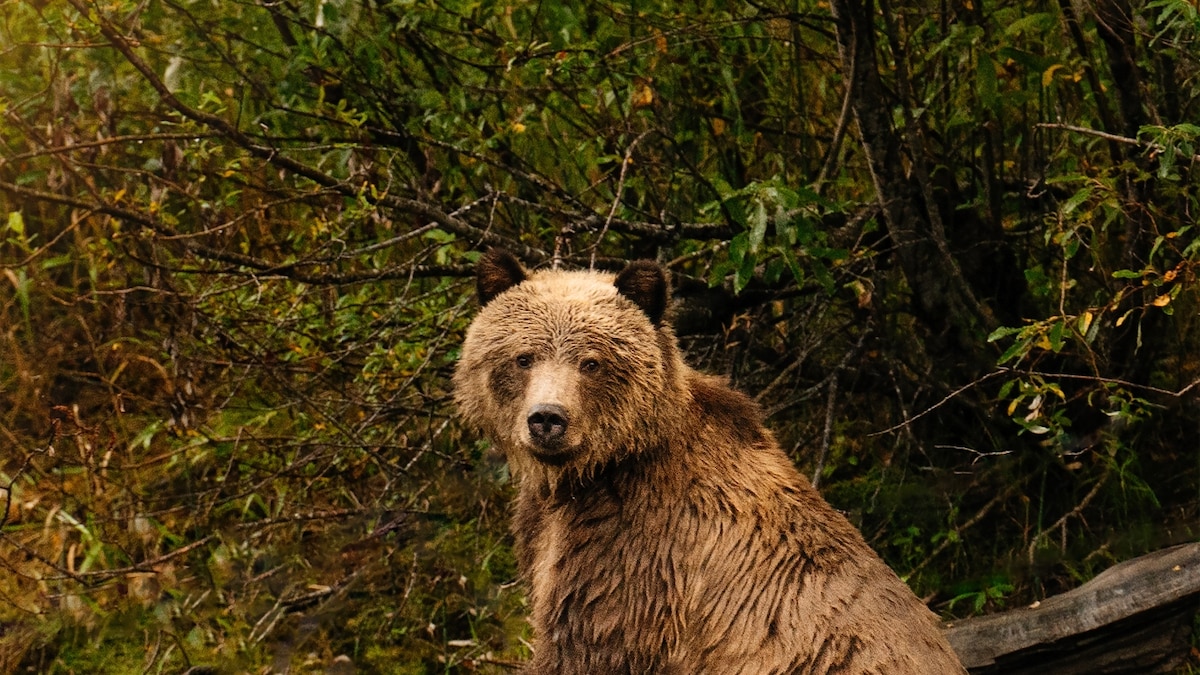 Our raft descends the Atnarko River into British Columbia’s lush Great Bear Rainforest, one of Earth’s largest remaining temperate rainforests. As we skirt a rocky river bank, a young grizzly bear and her two cubs emerge from the canary grass. They walk in single file beside us, a little too close to be comfortable.

Years of backcountry hiking—and established safety protocols to avoid grizzly bears—tell me to put more space between us. But a recent Canadian study, developed in collaboration with First Nations groups, suggests that humans may have once shared a closer relationship with bears, one based on reciprocity of resources rather than fear.

In an ecosystem experiencing habitat loss due to logging and in a province with a history of grizzly bear hunting, the study findings could have broad implications for Indigenous-led conservation and wildlife tourism in British Columbia. The report supports the conventional wisdom that Indigenous traditions are effective conservation practices.

Zoom in to see the other locations mentioned in the article.

In 2021, researchers from five coastal First Nations and scientists from the University of Victoria studied genetic clusters of grizzly bears on the central coast of the Great Bear Rainforest. Using DNA samples from snags of hair, they made a startling observation. Three distinct genetic groups of bears lived in areas that aligned geographically with the traditional territories of three native language groups: Tsimshian, Northern Wakashan, and Salishan Nuxalk.

The researchers concluded that these bear territories may have formed from resources shared with humans rather than “resistance factors” or physical barriers such as a mountain range. In other words, the bears chose to stay in areas with plenty of food, water, and shelter, just like these native groups did. “The landscape shapes bears and humans in similar ways,” says Lauren Henson, a biologist at the Raincoast Applied Conservation Science Lab at the University of Victoria and co-author of the study.

This conclusion appears to echo the “kincentric” view that some coastal First Nations have held for centuries, that all natural elements of an ecosystem are intertwined. “Our elders said the bears taught us a lot about how to live here – what we could eat, where we could stay. We just have a lot of the same needs,” says Jennifer Walkus, elected board member of the Wuikinuxv Nation and co-author of the study.

The findings call into question the effectiveness of current government grizzly bear management practices, which do not consider genetic data. This is an important distinction because monitoring genetic differences can help improve the health of a population by alerting managers to high levels of inbreeding. It can also help grizzly bears better adapt to threats and a changing ecosystem.

Equally important, the study makes a compelling case for incorporating Indigenous Ecological Knowledge into conservation efforts, a recommendation now supported by a government mandate in Canada.

Not only does indigenous knowledge contribute to more nuanced research, but a 2021 study showed it can lead to more successful conservation. Similar discoveries have been made all over the world, from Australia to Brazil. In British Columbia, Indigenous-led or sponsored research has been used to influence bear conservation policy, from ending trophy hunting in 2017 to protecting habitat on British Columbia’s islands. British.

“Researchers are usually only there for a short period of time, whereas if you work with local nations that work in a territory, they can see what’s going on with these animals throughout the year,” Walkus explains.

The understanding that First Nations societies have acquired over centuries of life along the central coast of British Columbia allows for a holistic approach to ecosystem management. “Government tends to look at all species at a very high level and manage them on a regional scale, while our people manage resources on a catchment scale,” says conservation manager William Housty. for the Heiltsuk Integrated Resource Management Department and co-author of the language group study. “When we start looking at the health of all these different resources in a system, we can really paint a picture of how everything is interconnected and manage individual species accordingly.”

This philosophy is applied to British Columbia’s salmon population, a primary food source for grizzly bears that has been decimated by overfishing and climate change. To restore a healthy population to its territory, the Wuikinuxv Nation is working with Fisheries and Oceans Canada (DFO) to determine carrying capacity and harvest limits that consider bears, fish and humans equally.

(Canada’s salmon are in danger. How can tourists help?)

This effort follows several studies conducted by the Wuikinuxv and the Raincoast Conservation Foundation, one of which found that humans and bears can equally share salmon in a way that benefits both. “Finding ways to manage not just for people, but for all species on our lands, is critical,” Walkus says.

What does this mean for travellers?

The 2021 grizzly bear genetic study doesn’t just fill important conservation context, it could lead to a richer wildlife-viewing experience for travelers at places like Knight Inlet Lodge, an aboriginal property on Vancouver Island in the Great Bear Rainforest, which helped establish the Commercial Bear Viewing Association of British Columbia (CBVA). The association has also led efforts to end trophy hunting in British Columbia and is now setting the standard for responsible bear viewing in the region.

“The experience of seeing a grizzly bear coupled with conservation messages in a tourist setting has the potential to influence human attitudes and perceptions,” says Kate Field, a conservation scientist at the University of Victoria who works with Aboriginal researchers to study the effects of human presence on bear behavior.

“The study can help people understand how complex and important the relationship between humans and bears is and give them the opportunity to see this in the field,” adds Housty. “The more people know and understand this, the better we can manage our relationship with bears and conserve their habitat.”

By learning this history, as well as the cultural significance of grizzly bears to coastal First Nations, travelers may come away with a different perspective on their own relationship with grizzly bears and the land. That’s important to Ellie Lamb, a bear guide at CBVA partner Tweedsmuir Park Lodge, who has spent years learning about key species from bear behavior experts and the Nuxalk people.

“First Nations know how to get along with bears; it has been passed down from generation to generation,” she says. “They were witnesses, and I think as guides we can learn from them.”

Back in the Great Bear Rainforest, Lamb joins me on a hike through Kettle Pond in Tweedsmuir Provincial Park. We stop at a sasquatch-sized imprint in the velvety moss beneath our feet. “It’s a stomping path,” she explains, trodden by bears who “stomp” through the forest, leaving their scent and hair scratching their backs on tree trunks.

“It was left recently,” she said, plucking bear hair from one of the trees. That familiar adrenaline rush I felt while rafting returns, but quickly dissipates. As we follow bear paw prints, just as First Nations peoples have for centuries, their closeness elicits a feeling closer to kinship than fear. I see their footprints in this ancient forest as a reminder of the connection coastal Indigenous peoples have with grizzly bears.

Who better to lead the future of grizzly bear ecotourism than the people who have lived alongside these animals for millennia? “When we think of managing bears, it’s like managing ourselves.” said Walkus. “We were so closely connected.”

The Great Bear Rainforest stretches 250 miles from Knight Inlet to the Alaska Panhandle along the British Columbia coast. You can reach Tweedsmuir Provincial Park via a one-hour flight from Vancouver International Airport in Bella Coola. Pacific Coastal Airlines flies five days a week. Indigenous Tourism BC offers more ideas on how to travel responsibly in the province.

Grizzly bears roam the forest throughout spring and summer, but for bear viewing, plan your trip in early fall to coincide with the salmon run.

Hike with us: On the way to the great outdoors? We can help. National Geographic‘s Trails Illustrated maps highlight the best places for hiking, camping, boating, paddling and wildlife viewing in North America’s scenic and rugged frontiers and urban fringes . Created in partnership with local land management agencies, these expertly researched maps provide unparalleled detail and useful information to guide experienced outdoor enthusiasts and casual visitors alike. Click here for a map of trails in Western Canada, including the rainforests of British Columbia.
Chloe Berge is a Vancouver-based writer covering travel, conservation and culture. Follow her on Instagram.

Improving financial health: a win-win situation for banks and their customers