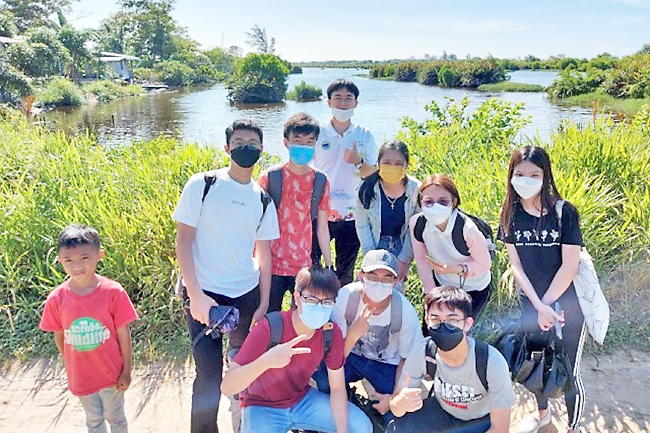 Learn about wildlife conservation in Miri

Environmental engineering students from Curtin University Malaysia (Curtin Malaysia) learned about wildlife conservation in Miri through activities organized by the university’s Faculty of Engineering and Science.

Activities included a trip to the Kuala Baram Wetlands, about a 40-minute drive from the city center and a short distance from the Curtin Malaysia campus.

Eleven students led by the unit’s professor, Dr. Tay Ai Chen, conducted a survey of the wetland to determine its geographical characteristics and its role and importance for wildlife.

This gave the students a better understanding of the ecosystems and biodiversity of the Miri wetlands.

Covering 600 hectares, the Kuala Baram Wetlands are a popular spot for birdwatching in Miri, being a haven for a wide variety of native and migratory birds.

Much of the Curtin Malaysia campus is surrounded by wetlands.

The area consists of mudflats and mangrove forests, salt marshes, shrimp and fish ponds, as well as freshwater lakes and rice paddies which are ideal habitats for wetland birds.

Dr. Tay also led a group of 16 students in the Piasau Nature Reserve (PNR), Miri’s unique urban forest reserve dedicated to the preservation of native wildlife about five kilometers from the city center.

While there, the students were briefed by park ranger Louis Velda anak Dominic Salon, who also took them on a walking tour of the reserve to give them a more in-depth look at the resident flora and fauna, including including his famous Oriental Footed Hornbills; management of the PNR by the Sarawak Forestry Corporation and ongoing wildlife conservation and forest rehabilitation activities.

Student Woo Jun Fui said he was most fascinated by the wetlands in Kuala Baram because he felt so close to nature there.

This view was shared by his classmate Diya Merlin Varghese, who said it was the perfect place for birdwatching. She said PNR was also a great place for wildlife viewing and photography.