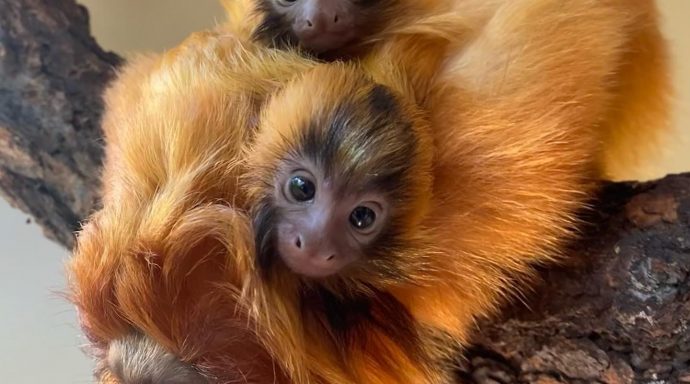 At six weeks old, the curious monkeys have yet to be named, but spend time with mum and dad, which is rare given the species is endangered.

Mogo Zookeeper Chad Staples said staff were not even sure the gender of the new arrivals yet, as they left the family alone to bond.

â€œIt’s the first time that she’s a mom, so you don’t want to disturb her,â€ he said. “We’ll have to do health checks on them at some point, but as long as you see them feeding and they have a firm grip on Mum, you just leave them.”

These monkeys from the tropical forests of Brazil get their name by tying golden-colored hairs around their necks, which form a mane very similar in appearance to that of a lion.

â€œIt’s a very special species,â€ said Chad. â€œYou almost can’t believe something is that color. Very striking, very interesting and a real treat for people to see. You would never see them in the wild, that’s for sure.

Another special observation is the twins’ bond with daddy, who carries his fair share of parenting.

â€œDad plays a pretty big role,â€ Chad says. â€œQuite often during the day, mom will hold one while dad will hold the other. Then the one who is with daddy will call because he is hungry and they will talk.

â€œAlthough dad can’t take care of a lot of the feeding, he does a lot of parenting. So he is very active, there with mom and makes sure he bond with the two babies.

While it’s not uncommon for male primates to play a role in parenting, males aren’t always that close.

For example, when Mogo Wildlife Park welcomed a baby silver gibbon in May, the father was seen playing a more protective role, overseeing the encounter while the mother and sisters looked after more.

â€œIt’s wonderful to watch,â€ says Chad, who got a perfect glimpse of the twins recently when they looked straight into her camera lens.

â€œThey are very curious. All primates are naturally curious and very intelligent. They’re just interested in what’s going on.

Visitors to the zoo will be able to see the twins on display in a large glass exhibit when it reopens after the lockdown.

The staff are also delighted to welcome a baby zebra every day and a giraffe in a few months.

The popular white lions were also recently moved from their long-term enclosure to a newly renovated exhibit, which regular visitors will be delighted to see.

Original article published by Hannah Sparks on About Regional.