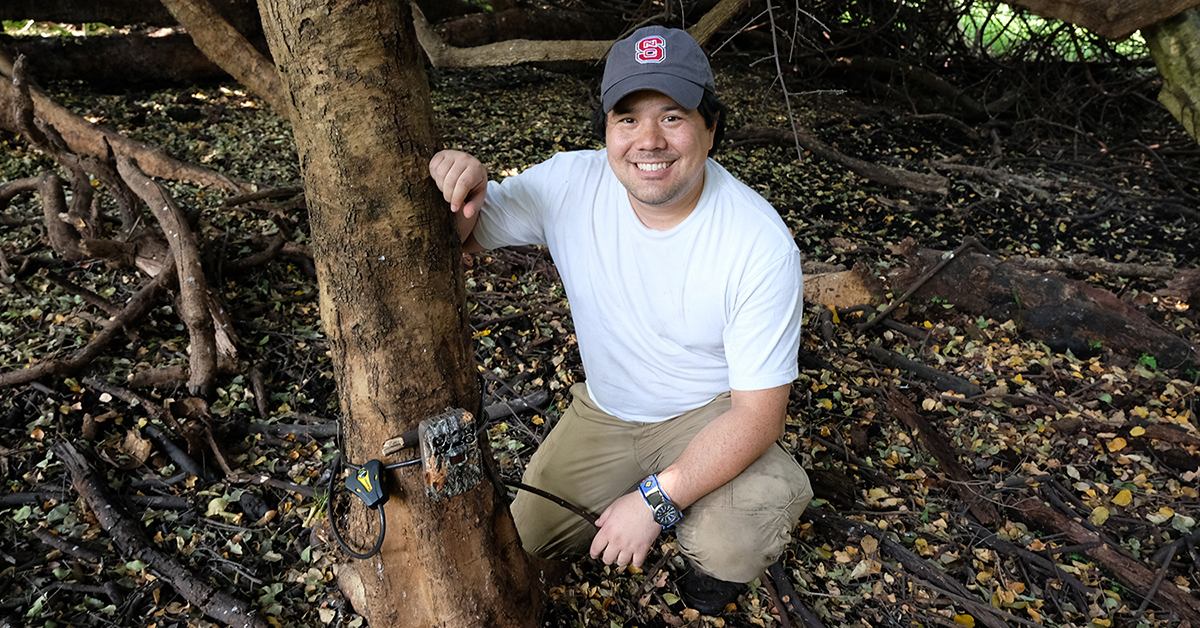 On a hot August day in Kasanka National Park in northern Zambia, Matt Snider climbs out of the backseat of a Toyota Land Cruiser and walks into a nearby patch of forest. As he walks through a maze of low branches and intertwining roots, Snider periodically stops to set camera traps on the surrounding trees. The cameras will act as Snider’s eyes in the coming months, taking pictures of animals as they walk, climb or crawl.

Snider, who is a doctoral student studying fisheries, wildlife, and conservation biology at NC State, uses the cameras to examine Kasanka’s wildlife for his thesis and to help park conservation initiatives. This includes a project focused on understanding the reaction of local predators to the annual arrival of straw-colored fruit bats in the park.

Between October and December each year, around 5 to 10 million straw-colored fruit bats from around the world congregate in the evergreen swamp forest of Kasanka where they feed and rest. “This migration is quite unique,” ​​says Snider. “It’s the only event in the world where such a large number of migrating mammals congregate in one place.”

Research by scientists at the Max Planck Institute for Ornithology shows that annual migration provides many ecosystem benefits, including reforestation. Indeed, as the bats eat throughout their stay in Kasanka, they disperse the seeds in the deforested areas. These seeds eventually grow into trees and other types of vegetation.

Unfortunately, migration is facing increasing pressure from habitat loss and other threats. In fact, according to the Kasanka Trust, which manages the park, commercial farms have already cleared more than 24,000 acres within a 3.2-mile buffer zone surrounding the park.

Since arriving in Kasanka, Snider has set up more than 50 camera traps in the park’s swamp forest in an effort to capture images of mongooses, genets and other animals known to prey on the fruit bats that roost there. . The images will help Kasanka’s wildlife management team better understand how predators might react to shifting bat populations in the park as habitat loss continues.

“Migration really creates a glut of resources for predators. So there is concern that an extirpation of these bats could cause local predator populations to decline,” Snider said.

Predators are an important part of a healthy ecosystem, controlling the size of prey populations and reducing the intensity of competition within a community. By providing the Kasanka management team with a better understanding of how predators respond to migrating straw-colored fruit bats, they can adopt conservation measures to protect the park’s evergreen swamp forest. and the surrounding natural landscape from habitat degradation, ensuring that fruit bat and predator populations remain healthy.

In addition to studying Kasanka’s predators, Snider also deployed about 30 camera traps across the park to assess the presence and population health of several antelope species, including the Defassa waterbuck, sable antelope , roan antelope and Lichtenstein’s hartebeest. These species, which are already rare and rarely seen in Kasanka, face increasing pressure from habitat loss and poaching, the latter being particularly prevalent.

Poaching for wildlife is at its peak during the rainy season in Kasanka, with poachers mainly targeting small antelope for their meat and income. The park currently employs over 25 law enforcement scouts who work in five-man security patrols. Since 2019, park patrols have made more than 45 poaching-related arrests and removed more than 850 snares.

Snider routinely analyzes camera trap footage for poachers and reports his findings to Kasanka’s law enforcement scouts. This includes information on where, when and how frequently poaching activities occur. “Some of my data from the camera traps has been very helpful to law enforcement in the park,” he said. “A number of my cameras actually detected poachers in parts of the park where poaching activity was less known.”

The images from Snider’s park-wide cameras will ultimately help Kasanka implement effective anti-poaching and conservation measures in areas where antelope and other species of concern are prevalent.

Leaving Kasanka, Snider plans to leave the camera traps with the park management. He is currently training scouts to use the cameras and manage data through Wildlife Insights, a new online platform that uses artificial intelligence to automatically identify animals in camera trap images.

“The research cycle should no longer depend on a scientist like me,” Snider said. “Scouts can now be the enduring presence on the ground and continue camera trap projects to benefit conservation efforts over time.”

Snider added: “Capacity building like this is key to breaking the colonial model of outside researchers coming to conduct research but not leaving the skills or tools for sustainable, local-led conservation practices after their departure.

Things to do in Cambridgeshire: Wildlife park is among East of England Tourism Awards finalists