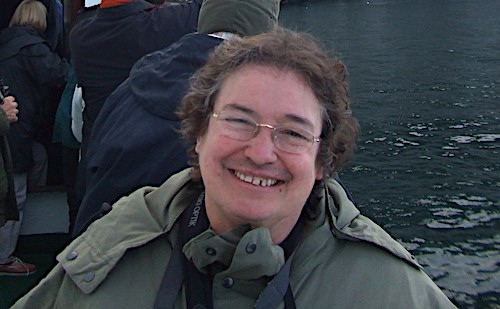 AFTER school in Acton, West London, Elizabeth Crichton Weir-Breen attended Secretarial College in Edinburgh. Her first job was the senior personal assistant to the managers of the Guardbridge paper mill in Fife, before moving in 1973 to a similar post with the managing director of The Scotsman Publications.

After several seasons of work in ski resorts in Austria and Switzerland, she created her own public relations company in 1979. In 1982, Maurice Mullay hired her to advise Shetland Islands Tourism on advertising and public relations.

By the early 1980s, the oil construction boom was drawing to a close and local hotels were in dire need of new customers, but tourism was in the doldrums – due to the housing shortage during the years of construction of the Sullom Terminal. Voe.

Libby’s mandate was to promote Shetlands as a holiday destination, a task she undertook with great enthusiasm and considerable success, organizing nationwide publicity and promoting the attractions of Shetlands during tourist fairs all over the country.

She quickly noticed a gap in the market. Wildlife vacations were, even then, a rapidly growing sector of the national and international tourist trade, but the Shetlands had little impact, despite its superb wildlife attractions.

The tourism organization was starting to work with Bobby Tulloch to promote his entertaining slideshows to RSPB member groups across the UK after he pointed out that the RSPB had more members than all political parties combined.

Libby organized these tours (which included live Shetland music) and made sure local newspapers and radio in places such as Coventry and Milton Keynes heard about the campaign. Soon, Shetland holiday bookings started to increase. Best of all, Libby was delighted to see how many visitors have become ‘repeaters’ – returning to the islands year after year once they have discovered the incredible colonies of Shetland seabirds, as well as the bird watching opportunities. otters and killer whales.

Libby’s success in marketing Shetlands led her to participate in the development of wildlife tourism in the Falkland Islands in 1987. With Bobby as a business partner, she established Island vacation and Bobby took their first clients to Port Stanley in 1988. The company’s small-group tours to the Falklands were quickly joined in Libby’s eye-catching brochures by organized trips for wildlife to, among other places, Crete, Mauritius. , Seychelles, Saint Helena and South Georgia. , Svalbard and the Pribilof Islands in Alaska, as well as annual trips to Shetland Islands.

The company has been in the business successfully for over 30 years and liked to boast, and rightly so, that Island Holidays “operated from the Arctic to the Antarctic”.

In June 2009, to mark the 21st birthday of Island vacation and in memory of Bobby, who died in 1996, Libby organized a memorable Oban expedition to Orkney and Shetland aboard a small Russian cruise ship. Highlights include a call to Bobby’s sister, Mary Helen Odie, in Burravoe, Yell, and evening visits to Noss and Mousa.

As usual, Libby burst out laughing over a drink before (and after) dinner. She was good company and loved a dram, a funny story and a happy song. His sense of humor was infectious (and at times deliciously saucy). Once, when an official filling out a form asked her if she was a ‘Madam’ or a ‘Miss’, she replied,’ Miss, of course! Do you think I would have married someone with a last name like mine?

Many of Libby’s customers were regulars and over the years some of them have visited almost all of her carefully selected destinations. They came back for more because she was detail-oriented – and an sometimes demanding employer of the professional guides she hired, always expecting the highest standards and 24-hour attention to the needs of her guests. , a few of whom were, to put it mildly, a little eccentric.

On a tour of Alaska, an elderly man, when he landed on a remote island in Prince William Sound and showed up with dozens of friendly sea otters at close range, growled, “Oh, j ‘ve seen some on that pier in San Francisco. “

During a tour of the Shetlands, a rather tall lady who had signed up for an ‘active walking’ holiday despite being barely able to move, complained that there was no movement. didn’t have enough broadband in Haroldswick, Unst, for a daily Skype call with his dog – which was woefully lacking at residential schools in Connecticut. Libby took that sort of thing in her stride, soothing the tousled feathers and usually eliciting a laugh, or at least a chuckle, from the offended party.

Libby had been in poor health for some time and retired last year, just as the Covid pandemic interrupted most international air travel, crippling Island vacation like so many other tourism businesses. Sadly, her first and only year of retirement was clouded by financial anxiety as she worked stressful long hours without reward, terminating the business, trying to recover money from recalcitrant airlines and reimburse clients for their canceled trips. This protracted crisis did not help Libby’s health.

She spent some time in the hospital earlier this year before apparently partially recovering, looking quite gleeful during a phone call with the writer on July 20. Her death at Ninewells Hospital in Dundee on August 11 came as a shock to her friends in Shetland and many other islands around the world, as well as to neighbors and worshipers in the village of Comrie in Perthshire where she lived for so long. years.

She is survived by her sister Eleanor and her nephews James and Marcus Mumford, for whom she was a staunch and devoted aunt.

News from Shetland asks its many readers to consider starting paying for their fix of the latest local news delivered straight to their PC, tablet or mobile phone.

Journalism comes at a price and because that price goes unpaid in today’s rapidly changing media world, most publishers – national and local – are struggling financially despite very healthy audience figures.

Most online publishers started charging for access to their websites, others took a different route. Shetland News currently has more than 490 supporters who all make small voluntary financial contributions. All funds are used to cover our costs and further improve the service.

Your contribution will ensure News from Shetland can: –

If you enjoy what we do and are very committed to impartial local journalism, then please become a supporter of News from Shetland by making a single payment or a monthly subscription.

Support us from £ 3 per month – it only takes a minute to sign up. Thank you.