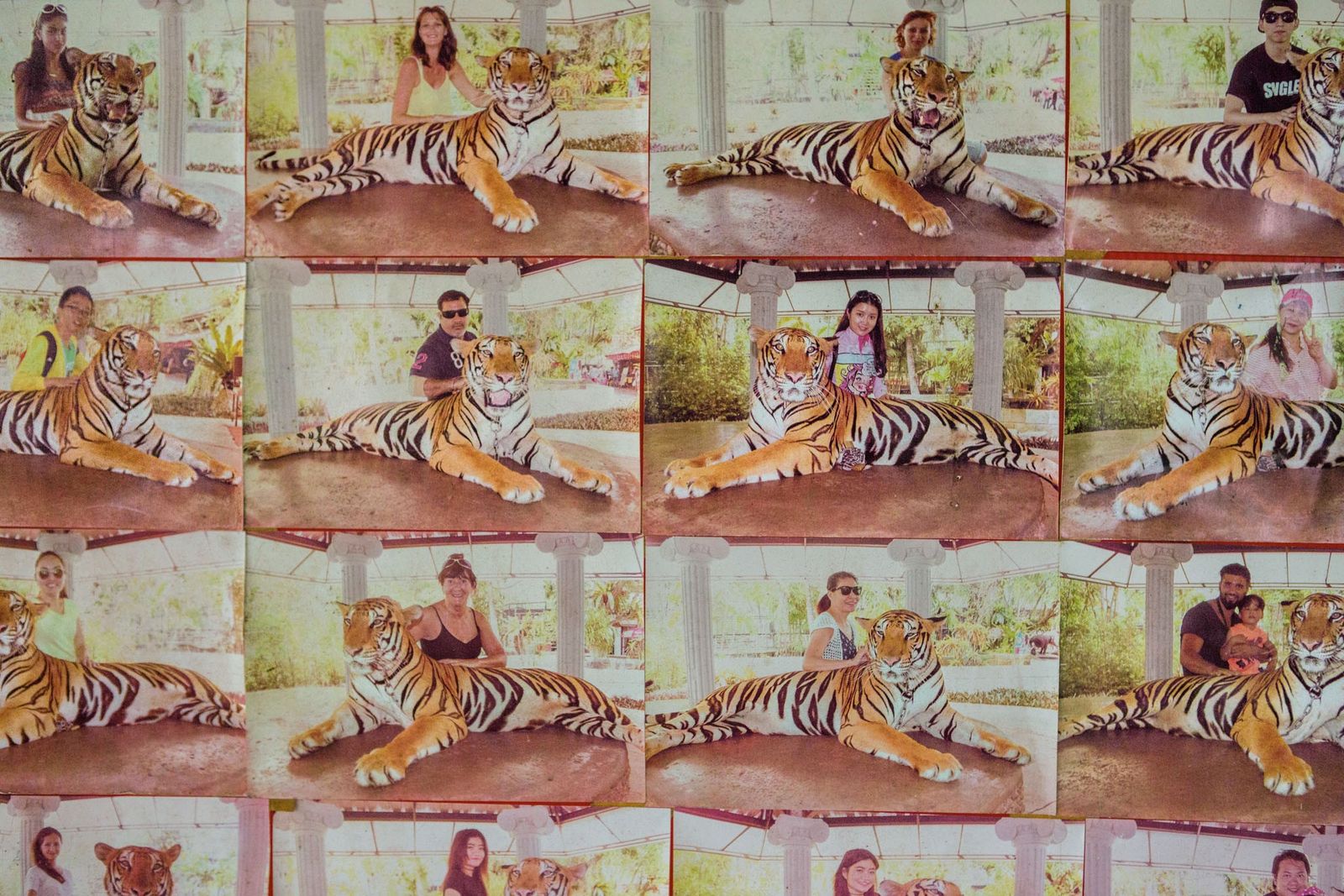 In Ban Ta Klang, a small town in eastern Thailand, modest houses dot the crimson earth. In front of each is a large bamboo platform for sitting, sleeping and watching TV.

But the first thing I notice is the elephants. Some houses have one, others up to five. Elephants stand under tarps, tin roofs or trees. Some are together, mothers and babies, but most are alone. Almost all elephants wear ankle chains or shackles, handcuffs binding their front legs together. Dogs and chickens weave their way between the elephants’ legs, sending puffs of red dust.

Ban Ta Klang, known as the Elephant Village, is Thailand’s zero point for the training and trade of captive elephants.

“Domestic elephants,” Sri Somboon said, gesturing as he turned down the television. Next to its outer platform, a two-month-old baby elephant runs around its mother. Somboon points to the third elephant in his care across the road, a three-year-old male tied to a tree. He twists his head back and forth and shakes his trunk. Looks like he’s losing his mind.

He’s in the middle of his training, says Somboon, and is getting good at painting. He has already been sold, and when his training is complete, he will start working in a tourist camp in the south.

Ban Ta Klang and its surroundings, which are part of Surin province, claim to be the source of more than half of Thailand’s 3,800 captive elephants. Long before the influx of tourists, it was the center of the elephant trade; the animals were captured from the wild and tamed for transporting logs. Now, every November, hundreds of elephants from here are exhibited, bought and sold in the province’s main town, Surin.

One evening, I sit down with Jakkrawan Homhual and Wanchai Sala-ngam. Both 33 years old, they have been best friends since childhood. About half of the residents of Ban Ta Klang who care for elephants, including Homhual, do not own them. They are paid a modest salary by a wealthy landowner to raise and train baby elephants for entertainment. At nightfall, thousands of termites swarm us, attracted by the single bulb suspended above the bamboo platform. Our conversation turns to training elephants.

Phajaan is the traditional, brutal process that takes days or weeks to break the spirit of a young elephant. It has long been used in Thailand and throughout Southeast Asia to tame wild elephants, which still represent many of the country’s captives. Under phajaan, elephants are tied with ropes, confined in tight wooden structures, starved and repeatedly beaten with hooks, nails and hammers until their will is crushed. The extent to which phajaan persists in its harshest form is unclear. Since 2012, the government has cracked down on the illegal importation of elephants from the forests of neighboring Myanmar, Thailand’s main source of wildlife.

I ask men how baby elephants born in captivity are broken up and trained.

When a baby is about two years old, they say, the mahouts tie its mother to a tree and slowly drag the baby away. Once separated, the baby is confined. Using an ear hook, they teach the baby to move: left, right, turn, stop. To teach an elephant to sit, says Sala-ngam, “we tie up the front legs. A mahout will use a hook on the back. The other will pull a rope over the front legs. He adds, “To train the elephant, you have to use the hook so the elephant will know. “

Humans identify the suffering of other humans by universal signs: people sob, grimace, cry, voice their pain. Animals do not have a universal language for pain. Many animals do not have tear ducts. More and more creatures – prey animals, for example – instinctively mask the symptoms of pain, lest they appear weak to predators. Recognizing that a non-human animal is in pain is difficult, often impossible.

But we know animals feel pain. All mammals have similar neuroanatomy. Birds, reptiles, and amphibians all have pain receptors. Just ten years ago, scientists gathered more evidence that fish feel pain than newborns. A four-year-old human child with spikes sunk into his flesh would express his pain by screaming. A four year old elephant is standing right there in the rain, his leg shaking in the air.

Of all the animals that suffer in silence I’ve seen them in swimming pools and enclosures around the world, two in particular haunt me: an elephant and a tiger.

They lived in the same facility, Samut Prakan Crocodile Farm and Zoo, about 24 km south of Bangkok. The elephant, Gluay Hom, four years old, was kept under a stadium. Aging tiger, 22-year-old Khai Khem, spent his days on a short chain in a photo studio. Both showed irrefutable signs of pain: the emaciated elephant had a bent and swollen leg hanging in the air and a large bleeding wound on the temple. His eyes were rolled back in his head. The tiger had a tooth abscess so bad that the infection was eating away at the bottom of his jaw.

When I contacted the owner of the establishment, Uthen Youngprapakorn, to ask him about these animals, he said that the fact that they did not die proves that the establishment was taking good care of them. He then threatened to prosecute.

Six months after Kirsten and I returned from Thailand, we asked Ryn Jirenuwat, our Thai interpreter based in Bangkok, to check on the status of Gluay Hom and Khai Khem. She went to Samut Prakan and watched them for hours, sending photos and videos. Gluay Hom was still alive, still standing in the same stall, his leg still bent at an unnatural angle. The elephants next to him had only skin and bones. Khai Khem was still chained by the neck to a hook in the ground. He just stays in his dark corner, Jirenuwat texted, and when he hears people coming in, he twists his chain and turns his back on them.

“Like he just wanted to be swallowed by the wall.”

Natasha Daly is a writer and editor at National Geographic. Kirsten luce is a freelance photographer based in New York. They traveled together through six countries to bring this story back.

Support journalism that highlights the exploitation of wildlife by donate to Wildlife Watch.