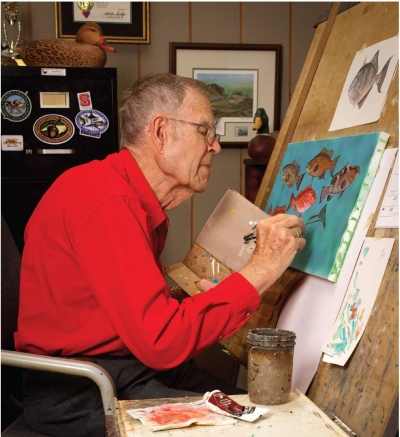 RALEIGH — Officials of the North Carolina Wildlife Resources Commission recognized Duane Raver as the 2021 recipient of the Thomas L. Quay Wildlife Diversity Award during its business meeting Thursday. It was awarded posthumously to Raver, one of the first fisheries biologists hired to the new Wildlife Commission in 1950, and former editor of the agency’s outdoor recreation magazine, Wildlife in North Carolina. . The award recognizes individuals who make outstanding contributions to North Carolina’s wildlife diversity and who are considered leaders in wildlife conservation.

A fisheries biologist who graduated from Iowa State University, Raver moved to North Carolina after graduating to join the Wildlife Commission. He was instrumental in the development of the Fisheries Division; however, it was his artistry that made him stand out and further his career. Raver was an illustrator and painter who had a profound influence on wildlife conservation through his works which demonstrated the beauty and character of many wildlife species.

In 1960, Raver transferred to work for the agency’s magazine, where he used his art to expand the scope of material featured in Wildlife in North Carolina. He developed a column called Nature’s Ways, which often featured species unknown to much of the public and illustrated features of their biological history. He was also the artist for many previous Quay Awards, in which he provided original artwork to recipients that reflected their individual contributions to non-game wildlife conservation.

The impact of Raver’s works on scientists, outdoor enthusiasts, students and citizens around the world is immeasurable. His depictions of fish, mammals, birds, amphibians, and reptiles bring North Carolina’s rich ecological diversity, from the mountains to the sea, to life.

Raver has generously shared his work with conservation and scientific organizations to help with fundraising efforts and the promotion of wildlife conservation. His work has exposed many people to species they would otherwise have little chance of seeing.

Raver died Feb. 15 at his home in Garner surrounded by his family. His health has been declining for some time, but that has never stopped him from pursuing his passion. His obituary reads: “Even during his years of declining health, Duane continued to produce art and was working on an illustration of fish on a boat paddle just four days before he passed.”

Raver was nominated in 2021 by former colleagues who planned to present him with the award at home earlier this month. The high spread of COVID this winter prevented them from making the visit.

“Thursday was bittersweet. We’ve been waiting months to present this award to Duane,” Wildlife Commission Executive Director Cameron Ingram said. “We were able to present the award days before he passed away, but it would have been truly special to express in person our appreciation and gratitude for his work and dedication to wildlife conservation.”

What happens when you can’t repay a payday loan?