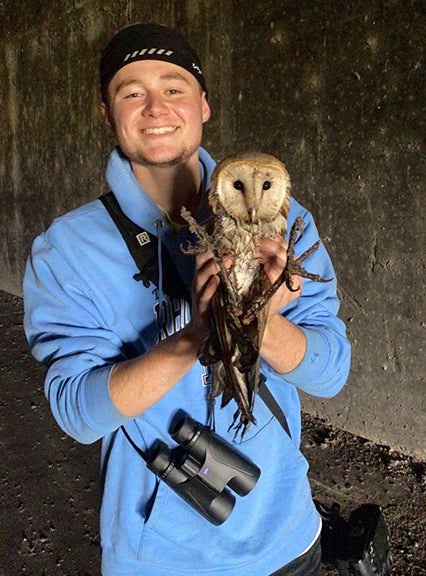 KINGSTON, RI – 9 May 2022 – It is well before dawn in Point Judith. The salty mist mixes with a cold autumn wind that seems to sneak around the neck. It is too early for walkers along the shore. But a lone figure stands perched atop a two-story concrete bunker, a remnant of World War II. He points a microphone at the sky.

Instead of searching for enemy fighter jets, Sam Miller tracks bird migration as part of his bachelor’s degree in wildlife and conservation biology at the University’s College of Environment and Life Sciences. of Rhode Island.

Miller’s interest in wildlife dates back to his pre-teens, when he would borrow his mother’s camera to take pictures of any wildlife he could find. “And then it shifted to taking pictures of birds at our feeders,” Miller said. “It started with wondering what species these birds were and putting a name to the picture. I opened up my first field guide and started flipping through the pages and seeing all the different birds I I didn’t know they existed. From then on, I just started going out and looking for them.

Miller initially considered a major in biology, but the lure of the outdoors was strong. “I’ve always been interested in the natural world, and wildlife conservation seemed like the most appropriate major,” said Miller, a May graduate of URI. “I wanted to focus on being more outside of contact with animals, rather than the practicalities of studying cell life and its more medical aspect.”

Native Gambrills, Maryland, Miller came to URI as part of his academic research and fell in love with the area. “I saw they were doing some really cool research here. I enjoy studying and observing bird migration in the northeast. It’s one of the best places to see fall migration, so I thought I’d get busy. And besides, I also liked the size of the school and the campus. It was a kind of good compromise between a small campus and very large ones.

One of the highlights of Miller’s time at college came in November when he discovered a sharp-tailed sandpiper, a bird that belongs to Siberia, while leading a birding event. at the Galilee Bird Sanctuary in Narragansett. He had recruited about 35 bird watchers and was looking around when a bird exploded in flight right in front of him.

“I was extremely shocked, and I think it was just as surprised as I was,” he said. “My heart skipped a beat for a second and then I realized this didn’t seem to match everything I had in my bird memory bank.”

Eventually, the sighting of rare birds was confirmed, and Miller realized that the sighting made an important contribution to the birding community. It was the first time a sharp-tailed sandpiper had been spotted in the Ocean State.

Such experiences were part of the reason Miller pursued his original choice of wildlife and conservation biology. “I loved all of the courses in my major because they really emphasized experiential learning outside of the classroom.”

This experiential learning was why Miller spent many hours standing atop a Point Judith bunker, pointing a microphone at the predawn sky. He listened to the calls of birds in order to collect data on their migration for a class.

“I was able to get a grant that gave me enough money for the microphone technology, but other than that I was on my own with the birds. It seemed appropriate for my entry-level research of having some high-tech mic, but mostly doing it with human labor,” he said.

“I’m still working on data analysis through a course recommended by URI Professor Peter Paton. So everything has a way of fitting together again.

In the coming months, Miller will be working with a bird biologist from Rhode Island’s Department of Environmental Management, which is an exciting prospect for him.

“I’ll be busy running in the salt marshes and doing aerial surveys of colonial waterfowl and salt marsh sparrows and more. I’m going to do all kinds of fun projects this summer,” Miller said. “My first day is before graduation, so I’ll start running.”