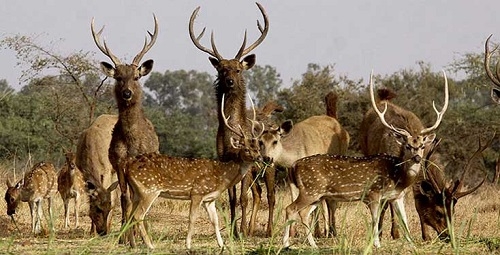 In order to maintain the spotted deer population, Van Vihar National Park moved another group of deer to Kheoni Wildlife Sanctuary, Dewas. The park management informed that it is planned to transfer about 100 spotted deer to Kheoni, of which 45 have already been sent. As the spotted deer population increases at a faster rate in Van Vihar National Park, more than 300 herbivores have been moved to other forest areas in the state. The deer are transferred using the African Boma technology which helps to capture the animal in a natural way. The park has planned to move about 200 additional spotted deer to various tiger reserves. As an experiment, the park has also moved a female black stink bug to the Kheoni Wildlife Sanctuary. Earlier in 2010-2011, Black Bug was moved to another reservation, but died of myopia. After this incident, the forest department could not plan the project of

moving the black bug. Van Vihar assistant manager AK Jain said the park has a capacity of 200 cheetals. Currently, there are more than 500 cheetahs in the park due to which they are moved to other reserves. In the first phase, spotted deer were sent to Gandhi Sagar shrine, Ratapani shrine and Ralamandal shrine. In the second phase, the cheetals are moved to the Kheoni Sanctuary and nearby forest areas of Dewas. Last month, a group of 16 spotted deer were moved from Van Vihar National Park to Kheoni Wildlife Sanctuary in Dewas. After witnessing the increasing population of Cheetal (spotted deer) in Van Vihar National Park, the Forestry Department gave consent to relocate them to other forest areas. There is also a proposed release of cheetal in the Gandhi Sagar Wildlife Sanctuary near Mandsaur.

Rosie, the preserved great white eagle discovered in a former wildlife park, has an incredible story

Wildlife conservation can be promoted through the school curriculum