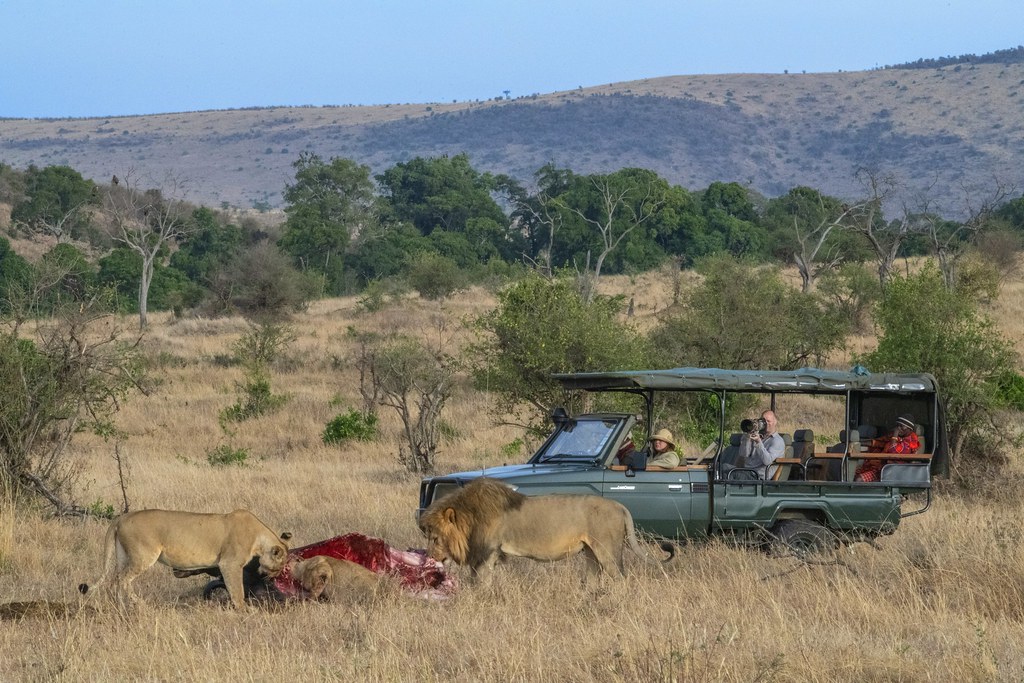 With the number of visitors declining, Kenyan conservationists must consider other sources of funding for conservation.

Find out more of our Covid-19 coverage.

The great migration to the Maasai Mara National Reserve in Kenya is one of the most impressive animal shows in the world. Beginning in July each year, millions of wildebeest, zebras and gazelles migrate from the Serengeti to Tanzania in search of cool grasslands. On their journey, they dive into the crocodile-teeming Mara River and bypass the occasional lion ambushing in the thickets of the riverbank.

A wonderful sight, the migration attracts thousands of tourists from all over the world. But this year, the show is missing one thing: an audience. Kenya reported its first case of Covid-19 on March 13. Travel restrictions and border closures quickly followed, precipitating a near collapse of the wildlife tourism industry, as up to 70% of these tourists are international visitors. By May, 90 percent of the tourism sector had closed, according to the Ministry of Tourism and Wildlife.

Tourism is highly dependent on Kenya’s nature and wildlife, and vice versa. Park fees and charges per overnight stay represent a major source of revenue for wildlife management. Therefore, the secondary victim of Covid-19 has been the conservation of biodiversity.

“The situation is quite serious because the government did not make a point of protecting these places, whatever the external income”, explains Paula Kahumbu, ecologist and CEO of the organization WildlifeDirect. Kahumbu explains that wild areas benefit the economy through ecosystem services such as clean air, water for domestic and commercial use, power generation, etc. â€œTreating tourism as the only source of income for protected areas is our biggest mistake,â€ she says.

With a growing population, development needs and high levels of rural poverty, the demand for land and natural resources in Kenya is enormous. Kenya Wildlife Service, the state agency mandated to manage wildlife and national parks, is often underfunded “especially by the government”, as noted in their 2017 annual report.

Park entrance fees are used primarily for operational expenses, while taxes paid by lodges and restaurants fund training and capacity development. Gaps remain in the protection and management of biodiversity. Today, the Covid-19 crisis is prompting conservation partners to rethink how to develop sustainable financing for the long-term protection of natural resources.

National parks, reserves, state forests and private conservatories constitute 18 percent of the total land area of â€‹â€‹Kenya. Yet most of Kenya’s wildlife venture outside protected areas in search of pasture, water and breeding habitat. Human and wildlife competition for resources often results in dangerous encounters, further increasing the need for secure wilderness areas. â€œWe should aspire to protect 30 percent of our land and sea areas,â€ Kahumbu says.

The creation of new parks is highly unlikely given that the Kenya Wildlife Service struggles to manage the current portfolio of parks and reserves. This means that the protection of fauna must be ensured by other means, in the spaces occupied by the communities. Wildlife conservators form initiatives with private actors and, unlike the national park system, they know that new wildlife areas will have to respect the rights of landowners.

Calvin Cottar is owned by Cottar’s Safaris, which operates a luxury safari camp in the Maasai Mara. “There must be a new value for natural biodiversity based on its ‘existence’ value, compared and assessed against competing land use,” says Cottar, a fourth generation Kenyan American passionate about the use sustainable nature.

Cottar Camp is located on the 7,600-acre Olderikesi Reserve, land leased to the Maasai people since 2013 through Cottar’s Wildlife Conservation Trust (CWCT). Through conservation easements, Maasai landowners agreed to limit cattle grazing and refrain from fencing and cultivating the land.

Nevertheless, the owners remain fully involved. â€œThey make the final decisions about where to rent and how much to rent,â€ Cottar explains. Community members also benefit from the CWCT, through educational assistance, medical clinics, infrastructure improvements and potential employment with the Conservancy and Camp.

The CWCT is not the only organization running a community conservation model. Fifteen wildlife conservatories around the Masai Mara have implemented similar easement programs, nearly doubling conservation land since the early 2000s. 100 other similar conservatories exist across the country with varying degrees of success. Conservatories likely fared better than national parks during Covid-19, as annual land rent payments for nature conservation continued. But tourist taxes have stopped, which is why, says Cottar, â€œwe are looking for alternative sources of funding. When tourism returns, it will be an added benefit for longevity. “

According to Cottar, land easement as a conservation tool could be expanded by involving more tourism actors, such as the more than 500 companies officially registered by Kenya tourism associations. Cottar recommends expanding the framework so that tour operators partner with forward-thinking safari camps and conservatories, and commit to funding biodiversity beyond just sending guests to parks.

â€œIf tourism businesses and lodges don’t secure land for wildlife, they themselves are central to the conservation problem,â€ Cottar explains. â€œThe government should give tax breaks to landowners and businesses that lease land for natural biodiversity. “

Further opportunities exist to diversify conservation income streams away from the tourism â€œgolden eggâ€ through other methods of sustainable land use. In central Kenya, north of the Maasai Mara, is the 90,000-acre Ol Pejeta Conservancy, a private wildlife sanctuary and popular tourist destination. Its rich wildlife diversity includes the largest numbers of black rhinos in Kenya, the world’s last two northern white rhinos, and a sanctuary for chimpanzees rescued from the illegal animal trade.

Originally established as a breeding ranch in the 1950s, Ol Pejeta is still home to 6,000 Boran cattle, a hardy breed of native cattle raised for the beef industry. Cattle graze alongside wildlife such as zebras, giraffes, buffaloes, and various antelopes. Then the cattle are herded at night to protect themselves from lions and other predators.

The Conservancy also purchases additional livestock from neighboring breeders. The aim is to reduce grazing pressure in areas occupied by wildlife and provide income to underprivileged communities by taking advantage of Ol Pejeta’s ready-made markets for beef.

Tourism generates about 55 percent of Ol Pejeta Conservancy’s income. Agriculture contributes another 25 percent. The rest comes from fundraising. â€œConservation can be a productive and profitable form of land use that employs people and pays taxes,â€ explains Richard Vigne, CEO of Ol Pejeta. “What we are proposing is a new style of curation that achieves this goal and can be copied around the world.”

This approach has allowed Ol Pejeta to continue to generate income during the Covid crisis – income that we badly need. The protection and safety of rhinos alone costs $ 10,000 per year per animal. Ol Pejeta has 172 rhinos.

â€œWe have to be innovative and stop treating conservation like it’s some kind of sacred cow,â€ said Vigne, from Kenya, when asked to make protected areas more protected. financially resilient. It was the idea behind developing 1,000 acres of Ol Pejeta into an eco-sensitive vacation home residential estate that generated additional funding for conservation.

Habitat fragmentation caused by development is often linked to the decline of wildlife, as it interferes with the movement and ecology of animals. Nonetheless, according to Vigne, development on private land can be a conservation tool if properly managed. The Ol Pejeta housing estate was built along the outer boundary of the reserve and is surrounded by a predator-proof fence. The resulting safety zone has encouraged the proliferation of endangered herbivores like Grevy’s zebra and Jackson’s hartebeest within the estate, and the wetlands created within the estate maximize biodiversity.

The initial sale of the houses set up a reserve fund which Ol Pejeta now uses in the absence of tourism. By targeting the long-stay tourism market and with locals, the reserve generates additional income for the protection of wildlife. “It is a question of diversifying the sources of income to make the reserve less dependent on capricious tourism and more financially secure”, explains Vigne.

Kenya opened its borders and airports to international travel on August 1, but experts warn it could take up to two years for tourism to reach pre-pandemic levels. In the meantime, the ongoing pandemic may be the impetus for some wildlife advocates to put in place innovative interventions to protect the long-term future of Kenya’s biodiversity.